Three and a half Ahmadis and a Shia

My family moved to Lahore in early 1970s. We rented the lower portion of a house in what was still called Kirshan Nagar, despite being renamed Islampura, probably after the 1965 war. It was an old style house with an open central courtyard. There were two front rooms both having an opening onto the street. The owners lived in the upper portion but they purposefully kept one of those front rooms. They would hold a weekly religious gathering in that baithak.

I was a school going kid then. I probably would have never known what faith this family followed, if there hadn’t been a weekly ijtema in that room. The gathering itself did not arouse any interest in me, as I belonged to a Shia family, similar gatherings were part of my sub-culture too. I was actually attracted to the projector that they used to show certain films. I can now guess that those must be of one of their religious leaders.
My fascination was reserved for that buzzing machine and my inquiry from an elder about that machine and those films and gatherings helped me know, and remember, that they believed in some different faith. I recall no other difference reflecting in the interaction of our two families. We would meet like good neighbours do, and exchange usual pleasantries. If one of us occasionally cooked something special, we would share a bowl full with the other, the aroma of which we could not avoid sharing anyway, living so close to each other.

There was an Imambargah in the street behind ours and a big Sunni mosque at the end of this long lane. It may not be all that perfect at that time but frankly my only childhood experiences of religious intolerance are limited to a few school scuffles where a bully would accuse me of doing some nasty things as a Shia, which nobody believed to be true.

So the first Ahmadi I ever met was a regular guy from next door. I had no reason to hate him or for even respond to him differently in any way. We left that house in June 1973. The second amendment to the constitution, declaring Ahmadis as non-Muslims, was passed later in 1974.

I joined an arts college in Lahore in the early 1980s. I used to live in the college hostel. It was a no-holds-barred life filled with non-stop fun. It took our batch just a few weeks to gel together. We did crazy things that would stretch our relationships to unimaginable extremes.

We developed very deep and close friendships. Day-scholars, our class fellows from Lahore and those not living in the hostel, would miss on that closeness. They were kind of outsiders for us, they were mommy’s little children, the kind who are told to be home before dark. They were treated by the close in-groups of hostelites as aliens.

There was, however, one day-scholar in my class who probably thought ‘why should hostelites have all the fun?’ He would hang around, drop in and frequently stay overnight. I was friends with this bright and jolly young man and we spent a lot of time together working jointly on many art projects and discussing everything under the sun. 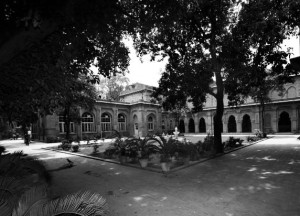 Once we were going somewhere together. His house fell in our way and he wanted to briefly stop over for something. I thought I would have a glass of water and wait in his baithak till he is free. To my utter surprise he hesitated allowing me inside his home. I was a bit disturbed but then pushed my way in, as would a close friend.

As I sipped the juice and looked around the room, I saw the reason for his hesitation hung on the wall. But why would he hide it from a close friend with whom he has shared so much. When he entered the room, I was standing in front of that picture. Are you an Ahmadi? I asked. Yes, he said with his head hanging down. The picture was of one of their religious leaders.

He was not feeling guilty for who he was but was ashamed that he had to hide his religious identity from a close friend. I also felt betrayed but would empathise with his position as well. We remained together till late that evening but did not talk to each other. We were arguing with ourselves. Is he afraid of me? Does he think I can harm him?

He was the second Ahmadi in my life. I met him a decade after the passage of that constitutional amendment and at the time when General Zia and his Jamaat-i-Islami enacted anti-Ahmadi laws. Unlike the first Ahmadi, whom I had met in my childhood, my friend was not a regular young man though he tried desperately to act as a ‘normal’ person of the same society.

After my college, I briefly engaged with a designing and publishing business, setting up a joint venture with some friends in Lahore around the early 1990s. One of my ‘clients’ was the student union of a university that was friends with me since my college days. I helped them put together their quarterly magazine.

The politics in this campus was quite different from what it used to be in my arts college. The student leaders here held guns and firing incidents between them and their rival, Jamiat Tulaba-i-Islam, was a matter of routine. Each of the many hostel buildings ‘belonged’ to one of the parties or some of its faction and was treated as their fort. I was once caught in a cross fire when Jamiat tried to ‘win back’ a hostel that used to belong to them but was later captured by their rival liberal party.

I was in contact with the entire hierarchy of that student party but certainly more with those involved in the magazine. The party could in fact be divided into two sub-groups, one was gun-loving and trigger-happy and nursed a grudge against the Jamiat. They looked like a ‘highly inflammable’ gang of youth, the dousing effect was provided by the second group. That was the writing and intellectual side which hated Jamiat for its obscurantist policies. I could not figure out whether they employed that gun-trotting group to protect themselves or if the gang roped these studious boys in to counter the Jamiat’s ideological side.

One day I was stopped at the campus gate and informed that the university had been closed down because a student scuffle had taken a life. I knew the backdoor ways well and also that no shut down applied on those well armed parties. I could not locate the person I intended to meet and went on to inquire from another. I was shocked to learn that he was the person who had been killed.

Why him? He was an unassuming, simple young man, a member of the editorial team, the one who looked after the poetry section, if I remember correctly. I could never know in my interactions that he was an Ahmadi, this secrecy had become a part of their sub-culture by now.

But the killers knew who he was.

This is how the story narrated by my other friends went. Jamiat wanted the campus to shut down. That was something that their elder party had instructed them to deliver to cater to some larger political end – maybe a message that the law and order situation in the provincial capital has gone from bad to worse. Jamiat’s position inside the campus, however, was precarious at that point in time. The gang-war was poised evenly and Jamiat’s own calculations did not require it to go for a kill. In fact, they apprehended a strong backlash and loss of territory in case of launching an offense. Blood on the campus walls was the time-tested way to ensure a shut down but how to manage it without inciting a furious response from the other party? Simple. Slay an Ahmadi.

Nobody will come to defend him. No gunman will return fire. Nobody will take out a protest rally. No official condolences.

That’s exactly what had happened.

That bright young poet was the third Ahmadi in my life. All those discriminatory laws by now had ‘settled in’. The legal infrastructure had built the capacity to facilitate parties to exploit these laws to their fullest potential. The society had internalised the new narrative too. It had become a seamless part of our culture that reflected in our default behaviors towards the people with a faith that is different from ours.

I haven’t met an Ahmadi since the past decade. I know of a few but we don’t meet. They have cocooned themselves inside their skins, hid their identities and barricaded their lives inside their homes. They have killed half of their beings. How can you befriend a person who is half dead?

I go past a graveyard daily on my way from home to the office. I noticed recently that its boundary walls have been raised and topped with thick spirals of barbed wires. An armed chowkidar now sits at the front gate – to protect the dead? I realise that this is an Ahmadi graveyard. Maybe my murdered friend was buried here and maybe his killers apprehend that he is still half alive.

Tahir Mehdi
Tahir Mehdi works with Punjab Lok Sujag, a research and advocacy group that has a primary interest in understanding governance and democracy. @     Facebook