Warm words of congratulations poured in from around the world for Britain’s Prince William and his wife Kate following the birth of their first baby, a boy destined to become king.

US President Barack Obama and his wife Michelle led the tributes, saying the birth was a “joyous occasion” and wishing the new parents “all the happiness and blessings parenthood brings.”

The Duchess of Cambridge gave birth to a healthy male heir weighing 8lbs 6oz (3.8 kilos) in London on Monday.

“Given the special relationship between us, the American people are pleased to join with the people of the United Kingdom as they celebrate the birth of the young prince,” the president said in a statement.

As Britain waited to catch its first glimpse of the newborn, Russian President Vladimir Putin offered his good wishes to the British monarch on the birth of her third great-grandchild.

Putin “congratulated Queen Elizabeth II on the birth of her great-grandson and wished strong health for the newborn, the Duchess of Cambridge and all the members of the Royal Family,” the Kremlin said in a statement.

Germany’s president Joachim Gauck sent congratulations in the form of two letters, one to the Queen and another to the new parents.

To the Queen, the president wrote: “The birth of the heir to the throne is for you, your family and the whole country, a great and happy event.”

He told the parents that the birth had brought “great joy in Germany” and wished the baby boy “happiness and good health”.

The as yet unnamed royal baby automatically becomes third in line not only to the national throne but to the 15 other Commonwealth realms that have the British monarch as their head of state.

Australian Prime Minister Kevin Rudd called it “a happy day for our close friends in Britain and the Commonwealth”, while New Zealand Prime Minister John Key hailed it as “wonderful news”.

In a letter to Queen Elizabeth, Prince Albert II of Monaco offered his “warmest and most sincere congratulations” to his fellow royal.

“Charlene, I and everyone in Monaco rejoice with Your Majesty, the royal family and the British people, in this happy event,” he wrote, referring to his wife, Princess Charlene, whom he married in 2011.

French President Francois Hollande sent his “warmest wishes of joy and happiness” to Kate and William.

“The happy news of the birth of the prince has delighted the French people,” he said in a letter to the young couple.

Israeli President Shimon Peres wished “a hearty Mazel Tov” to the royal family for a baby “born in the most democratic country on earth”.

“May he live to a hundred and twenty years,” Peres wrote on Facebook, adding a picture of a gift for the parents, a blue-and-white baby suit embroidered with the words “From Israel with Love”.

In Tehran meanwhile, Iran’s foreign ministry spokesman Abbas Araqchi told reporters: “I congratulate Her Majesty, the Queen of England, and also the Crown Prince on the birth. This is a source of happiness.” 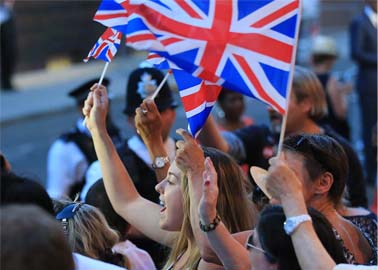 “We wish the son the best of health. We hope that with this event, Japanese people will feel closer to Britain,” chief Cabinet Secretary Yoshihide Suga told a news conference in Tokyo.

Some countries sent their best wishes via social media.

The leaders of Singapore and Malaysia both took to Facebook to offer their congratulations.

Celebrities too rushed to comment on the new arrival.

“It’s a boy! So happy for my cousin Kate and the future King of England!” tweeted US talk-show host Ellen DeGeneres, recently informed by the New England Genealogical Society that she is indeed a distant relative of the future queen.

And even the new manager of Manchester United Football Club, David Moyes, sent his best.

“Congratulations for the royal couple on the new arrival,” said the Scot as his team toured Japan.

Prince William is known to be a keen football fan but is thought to support Aston Villa, a rival team to Manchester United.