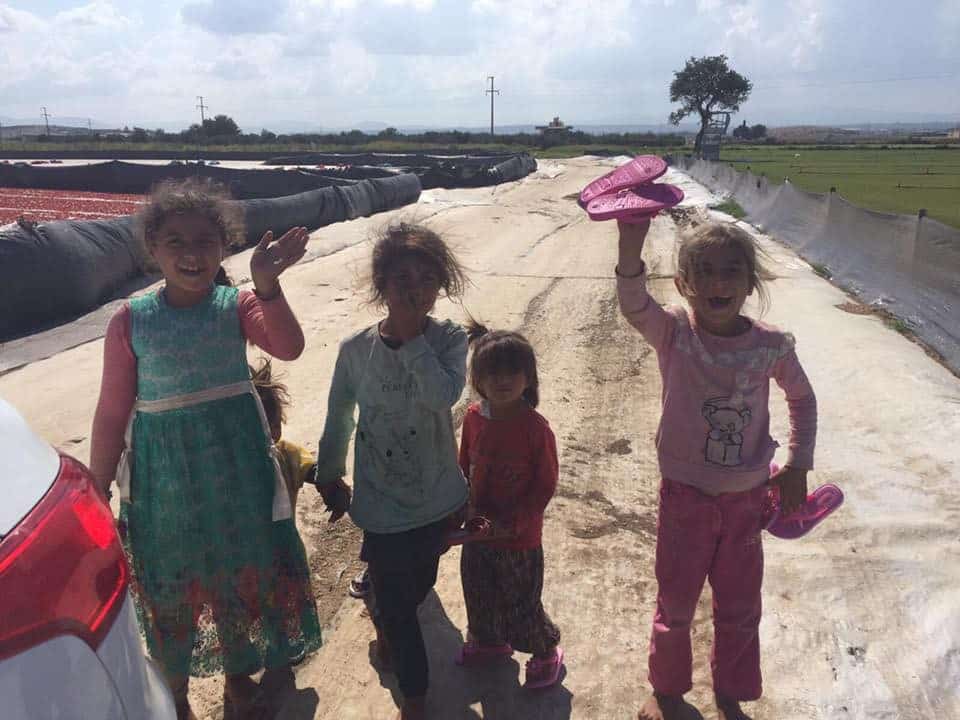 Imagine fleeing violent war and devastation in your homeland, only to assume a life of hunger and poverty in a foreign country. Rather than sentence themselves to live confined government camps, many families take the alternative option and break out on their own in hopes of survival. Stranded, hungry, and hiding in tents far from civilization at risk of being evicted at any moment—this is the harsh reality that many Syrian refugees are now faced with. These were the dire conditions that our small team of volunteers from “A Helping Hand” witnessed in July 2017.

There are currently over 30,000 refugees in the areas surrounding Izmir, Turkey. Many of these families fled from rural areas in Syria and endured long periods of travel on foot, traumatic sea voyages, and months of hiding to arrive in the Turkish countryside. Left stranded and undocumented, refugees live day to day in tents, hiding from authorities to avoid being uprooted from their makeshift homes. They rely on low wage farming jobs, earning less than half of the Turkish minimum wage to survive the harsh summer heat and bitterly cold winters. Many children within the camps are forced to work in the fields alongside the adults, leaving infants in the care of much younger siblings. These children are often left unsupervised in unsanitary and unsafe conditions from morning to dusk. The most vulnerable victims of the crisis—women and children—suffer greatly. A large number of refugees in such camps are pregnant mothers, newborn babies, young children, widows, and the elderly.

To access these isolated camps, we traversed unmarked dirt roads for miles each day to reach the refugees in need. Driving through rough terrain to access these camps was a challenge made possible only by the help and navigation of Nashwan Al-Wattar, who fled Iraq a few years ago and has become the main source of support and contact for the refugees surrounding Izmir. As we arrived at each of the refugee camps, children would flock around our cars, desperate for attention, love and any little or big donation they can hold onto. The desperation in these camps was suffocating. The number of babies lacking baby formula was heart-wrenching. Food, water, soap, and hygiene products—these are all luxuries for them. We found ourselves saddened and overwhelmed by the sheer amount of need for such basic necessities. Any attempt at forming lines for orderly distribution would eventually dissolve into chaos and desperate pleas.

What we saw in these deserted areas of Turkey were the worst possible conditions we could have anticipated—where help and hope are scarce. Many families greatest hope is to one day return to a war-free homeland where at the very least they can hold the dignity of citizenship and autonomy over their own futures.

Following our mission in Turkey, our team of volunteers arrived in Greece to provide aid to camps surrounding Athens. In stark contrast to the camps in Izmir, the refugees in these camps were living in a very different reality.

We visited several different camps in Greece, which are government-controlled camps with the presence of other NGOs and infrastructure such as ISO-boxes—essentially campers—providing air conditioning, heat, beds, and power. One camp we visited even boasted a “Youth Engagement Space,” a creative space specifically designed for the youth to express themselves and develop art projects. A few buildings were in the process of being built to facilitate other activities such as schooling for children.

Even with relatively stable living conditions and support from the government and other NGOs, these are still not the most favorable conditions for any human being to live in. For extended periods of time, it feels like a prison when there is no progress, no work, and no proper education. This is the unfortunate case with most of the established refugee camps we witnessed.

As humble as these makeshift camps were, we experienced selflessness in the hearts of the refugees we met. They would welcome us into their homes with kindness, offering us their meager supplies of food and drinks without hesitation. We were humbled by the overwhelming hospitability these refugees consistently showered us with even in the midst of their immense hardship.

Thanks to our generous donors and the efforts of our volunteer team, we were able to distribute food, supplies, and provide medical care to hundreds of families (the majority of the supplies were provided to camps surrounding Izmir, Turkey):

Although we are no longer on the ground in Turkey, thanks to our partner Nashwan Al-Wattar in Izmir, we can still make an impact long after our departure. We are excited to be collaborating with Nashwan to continue providing much-needed supplies and emergency medical care throughout the year to the refugee community surrounding Izmir. We encourage you to continue following the ongoing mission and supporting us via the information below!

Thank you all so much for your support—every donation, big and small, has a direct and meaningful impact on the lives of refugees and for that, we are truly thankful.

Keep in touch with us on Facebook! A Helping Hand