Thousands of British Muslims to pledge allegiance to Caliphate

The UK’s longest standing and largest Muslim convention, Jalsa Salana, returns to Hampshire for its 49th edition from Friday the 21st to Sunday the 23rd of August 2015.

Over 30,000 Muslim and non-Muslim guests from the UK and around the world including royalty, clergy from a range of faiths, ministers of states, academics and dignitaries will take part.

The keynote speaker will be His Holiness, Hazrat Mirza Masroor Ahmad, the 5th Khalifa (Caliph) of the worldwide Ahmadiyya Muslim Community. Ahmadiyya Muslim community has membership of tens of millions in over 200 countries and is known for its public spirited works which include collection of donations for the poppy appeal. The community also runs a major charity for projects in Britain as well as other parts of the world including schools and hospitals in Africa. Various other speakers from around the world will also take to the stage.

The Caliph, His Holiness Mirza Masroor Ahmad, who is the Head of Worldwide Ahmadiyya Muslim Community, said:

“Whilst our community is promoting the message of true Islam – of love, affection and peace – throughout the world, some young people are being misguided and radicalised to create disorder here and abroad, in the name of an entirely senseless and false Jihad. Furthermore the injustices in the world are fuelling dissatisfaction and it is vital that leaders take heed to promote harmony and peace based on justice as that will have lasting benefit.” 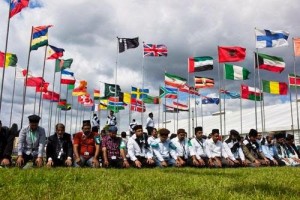 The convention will be hosted by 5,000 British Muslim volunteers, including over 2,000 Muslim women.

Oaklands Farm will be transformed into a mini-city complete with prayer halls, hospitality tents, camping sites, a ‘bazaar’ or shopping market, a bread-baking plant, an international television studio, bookshops and exhibitions.