Justice Syed Arshad Ali rejected the bail applications of Zaid, Zahid, and their father Sajid, accused of marrying Muslim women while being non-Muslim. The brothers who adhere to the minority Ahmadiyya faith were detained with their father in September last year. 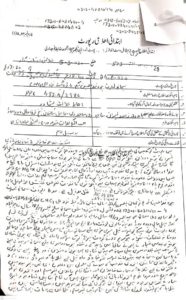 According to First Information Report filed with the police, brothers Zaid and Zahid from Sheikh Muhammadi area of Peshawar had married Sobia and Salma in June of 2020. Their mother-in-law alleged that she did not know that the brothers belonged to the minority Ahmadiyya community. On September 29th all three were charged with blasphemy as well as marriage fraud. The FIR references 493-A and 298-C of Pakistan’s penal code.

493-A. Cohabitation caused by a man deceitfully inducing a belief of lawful marriage.

298-C. Person of Qadiani group, etc., calling himself a Muslim or preaching or propagating his faith

The Ahmadis consider themselves to be Muslims but were declared-non-Muslim through a constitutional amendment in 1974. In 1984 military dictator General Zia ul Haq barred Ahmadis from identifying themselves as Muslim or using Islamic symbols in their religious practices. They face discrimination and violence over accusations that their faith insults Islam.