Up to 15,000 Ahmadiyya Muslims have taken part in Eid ul-Fitr celebrations in London to mark the end of Ramadan.

Thousands of worshippers had to go through metal detectors before entering the Baitul Futuh Mosque in Morden, south London – the largest mosque in western Europe.

The Eid celebrations followed the month of fasting for Muslims and were was organised by the British-based Islamic group Ahmadiyya Muslim Association UK. The group has been praised for its commitment to peaceful co-existence and charitable works.

The movement’s leader, His Holiness Hadhrat Mirza Masroor Ahmad – the Khalifa of the Ahmadiyya protected by a sizeable security team delivered an hour-long sermon on peace which was shown live on television to more than nine million people and translated into seven languages. Khalifa of Islam is a figure similar to the Pope in Catholicism.

Special prayers were also held for Fusilier Lee Rigby, who was brutally murdered in Woolwich earlier this year.

“We stood shoulder to shoulder with the British people to mourn the death of one of our soldiers,” 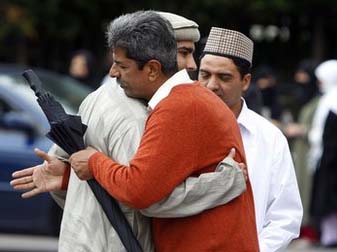 “The people who committed the crime have no idea of what their faith teaches because the word Islam itself means peace.”

“These people should be tried and they should be jailed for a very long time.”

Rafiq Hyat, national president of the Ahmadiyya community in the UK, said the group’s main message on Eid was one of peace.

“His Holiness has always encouraged all the various communities to come together in peaceful dialogue and try and achieve peace in this world through justice,” he said.

“He feels the only way we are going to have peace in this world is if there is justice from all sides and once we have justice we will have peace.”

Nasira Rehman, president of the Ahmadiyya women’s association in the UK, explained why men and women celebrated in separate rooms. She said:

“In Islam, ladies and men are segregated but we do exactly the same things. To make things easier for us to follow Islam the right way, women and men have their separate prayer hall, but I would say that the women’s prayer hall is more colourful than the men. 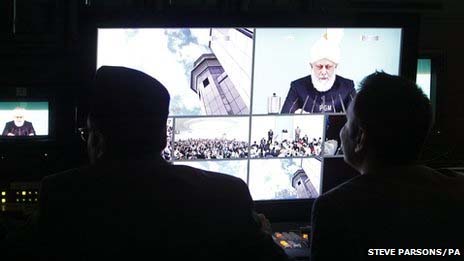 We have all got our nice clothes on, etc, but we thank God for everything in exactly the same celebrations. It is one of the fundamental teachings of Islam that men and women should have modesty with each other and this is the way we have been taught to have modesty, with that segregation.”

The Ahmadiyya Muslim community is celebrating 100 years of its establishment in Britain this year.

Home Secretary Theresa May spoke at an event in the House of Commons in June to mark the centenary.

The community has bases in more than 175 countries and is known for its voluntary work in the fields of education and health.

It was founded in the late 19th Century in India but its leader has been based in the UK since 1984 as a result of persecution in Pakistan.

In 1974 the community was declared non-Muslim by the Pakistan government because of theological differences with mainstream Islam.