Respecting others’ view is the way out

It is time we learned to dissociate Islam from any form of intolerance and extremism. Islam is a religion that teaches and advocates peace among people of diverse backgrounds and the whole world in its entirety. Owing to the heterogeneity of the world, Islam permits every human to have their say and practice whatever they deem right to make them attain salvation, but always pointing to the fact that the only way to attain salvation is peaceful coexistence.

The recent report in the September 6, edition of Punch newspaper about the attack of a chemist is absolutely in contravention to the teaching of Islam. Islam teaches us to avoid blasphemy and respect the religion of others. People from other faiths are expected to reciprocate. Thus, people should learn not to attack Islam for the wrong and idiosyncratic actions of the few who might not have the clear understanding of Islam and actions which oppose the teachings of Islam just because they are also called Muslims. Caution should also be taken at reporting events of this type that they are all religious because it is obvious that not all Hausa people are Muslims, though, predominantly they are. How are we to be sure that the attackers are Muslim Hausas? Also, the alleged blasphemy at Talata Mafara, Zamfara, where no Christian is later reported to have been killed, was earlier reported to be an attack on Christians.

While Islam does not prescribe any punishment for anyone guilty of blasphemy, it teaches us to avoid any form of indecent behavior and indecent speeches and any form of attack on any religion. The freedom of speech given in Islam does not allow anyone to misuse it and/or to attack the religion of others. It is thus necessary that for us to live peacefully in our heterogeneous community filled with people of different religious beliefs, learning to respect the belief of others is paramount. Many cases have been reported by the media as the reaction of Muslims to blasphemy, the Charlie Hebdo killing is one example, and the recent report from Lagos, Nigeria is another. While no sane human can be passive in the presence of abusing his parents, religious people will find it difficult to remain un-agitated in the face of attacking their belief. We should always expect a reaction from people when their views are unfairly attacked by others. This happens in politics and other social events that connect humans. The only way out is to follow the teachings of Islam by avoiding hate languages and deliberate attack on other people’s view. 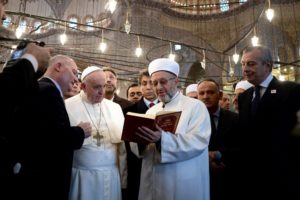 No religion of the world permits what has permeated human society. People of different religions are taught to respect the belief of others as people of different cultures can only be peaceful when the cultures of others are respected. As it is acknowledged that people of the world belong to different cultures, ethnic and race, it is normal for people to belong to different religion. And the fact that you are assured of salvation in your religion doesn’t mean others are candidates of hell fire. It can also be said that people who attack the religion or view of others defy the teaching of their own religion.

It should be reiterated here that Islam teaches its followers to avoid indecent behavior and talk against other religions. While most Muslims adhere strictly to this beautiful teaching, people from other religion should also learn from this and respect the view and religion of others.

Mustapha Adeitan
Adeitan Mustapha is a member of Muslim Writers Guild, Nigeria and a Post Graduate student at the University of Ibadan. @     Facebook