And to commemorate the then principal of Talim ul Islam College Hadhrat Mirza Nasir Ahmad ra a basketball tournament is still held in his name once a year.

In recent years Rabwah has regained its lost spot on the basketball court with new talent coming out of Fazl e Umar Basketball club under the coaching of Mr Lateef Jhurmat who is also the head of Punjab Basketball Federation.

This week four players from Rabwah Bilal Ahmad, Bilal Bajwa , Arslan Danish and Ahsan Salman represented Punjab in Under 20 Junior National Basketball Championships which were held in Islamabad where Punjab secured their title after defeating FATA 76-61 . 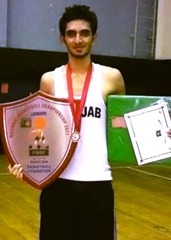 Ahsan needs a particular mention here as he is one of the 20 players who have been selected by FIBA (International Basketball Federation ) from all over Pakistan. He started off at the age of fourteen by playing for NJA (Nusrat Jehan Academy).

Afterwards he took part in Under 15 Punjab tournament where he was declared the Best Player of the tournament, and was one of the four players to be selected for Punjab Junior Nationals from Rabwah.

Apart from that he has also taken part in Open Punjab Inter Provincial Tournament, Senior National Championship and played for Punjab College as well where he managed to set the highest ever score of 42 under Faisalabad Board. Represented HBL aswell.  All in all he is a great asset to the club & Rabwah.