Thirty top religious leaders from Israel made a landmark visit to Auschwitz last week to commemorate the Holocaust victims and raise awareness about the rising antisemitism in Europe. They group included leaders from Israel’s Christian, Druze, Jewish and Muslim communities. 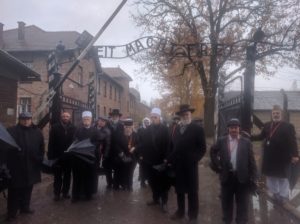 The leaders met with representatives of Warsaw’s Jewish community at the Nozyk synagogue and took a tour of a Museum dedicated to the History of Polish Jews.

On Wednesday, the group made their way to Auschwitz, Nazi Germany’s most infamous death camp and walked through the camp’s infamous wrought iron “Arbeit Macht Frei” (Work makes you free) gate before laying flowers at the death wall, where executions took place. 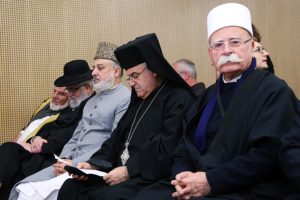 The leaders are members of Council of Religious Community Leaders in Israel. In a statement the council said:

“The purpose of this visit is to honor the memory of millions of Jews and other victims of the Holocaust, and to express the determination of the religious community leaders in Israel to do everything in their power to prevent the recurrence of such atrocities,”

In his speech, representative of Ahmadiyya Muslim Community, Muhammad Sharif Odeh stated that:

“The true Muslim is one who sacrifices himself for the sake of another man, share his mourning and sadness. If we believe that God cares for each one of us, regardless of religion then I am obliged to do the same. Otherwise, I’m like a wild animal that cares only for himself “

While, head of the Union of Imams in Israel, Sheikh Muhammad Kiwan called on “all leaders to grant rights to all people.”

The religious leaders also viewed exhibitions at the Auschwitz-Birkenau museum on the grounds of the former death camp in Oswiecim, southern Poland.

Israel’s vice-ambassador, Ruth Cohen Dar, said that the purpose of the trip was to bring “the most important religious leaders in Israel to Poland.”

One million European Jews died at the camp set up by Nazi Germany in occupied Poland in 1940-1945.

More than 100,000 others including non-Jewish Poles, Roma, Soviet prisoners of war and anti-Nazi resistance fighters also died there, according to the museum.

An estimated 232,000 of Auschwitz victims were children.