The Head of the Ahmadiyya Muslim Jamaat, Hadhrat Mirza Masroor Ahmad arrived in India on 23 November 2008 just after 4.40am. His Holiness had departed from London Heathrow in the early evening of 22nd November boarding a British Airways flight to Indira Gandhi International Airport in Delhi.

His Holiness was met at the plane by various officials of Sadr Anjuman Ahmadiyya India including the Chief Executive, Muhammad Inam Ghori, the Chairman, Dr Saleh Muhammad Aladdin and Nasim Khan the Secretary for External. Following arrival, His Holiness was led to the Ceremonial Lounge of the Airport.This Lounge is reserved for National and International Dignitaries. It is variously used to entertain the Prime Minister of India, the President of India and Foreign Leaders.

Whilst in the Ceremonial Lounge it became apparent that the time for the Fajr prayer was approaching. Therefore His Holiness instructed that the prayer be offered in the Lounge itself and thus he led the Fajr prayer before departing for the Delhi Mosque at 6.20am. The convoy arrived at the Bait‐ul‐Haadi Mosque in Delhi at 6.55am where they were greeted by the local Missionary, Maulana Kalim‐ud‐Din and hundreds of members of the local Jamaat. As His Holiness emerged from his car, members began raising slogans of joy whilst the Ahmadi children sang poems welcoming His Holiness.

Later in the day the members of the local Delhi Jamaat were granted the honor of meeting His Holiness. During these meetings members requested prayers and expressed their joy to His Holiness upon his arrival in India. 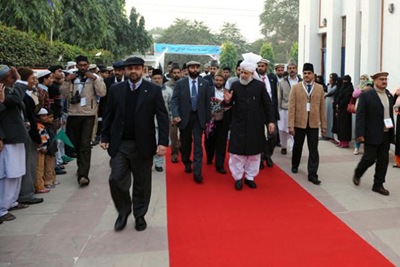