On Sunday 26 November 2016, the Berwick chapter of Ahmadiyya Muslim Community hosted a Holy Quran Exhibition at Hampton Park Library, in an effort to educate Australians about the beautiful teachings of Islam. This is the second successful exhibition it has hosted in the space of two weeks. 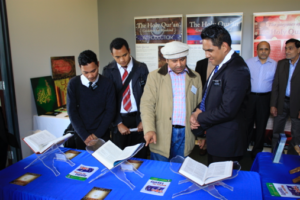 The exhibition, held at one of City of Casey’s busiest libraries, featured sample copies of the Holy Quran translated into foreign languages. The Ahmadiyya Muslim Community has translated the Quran into 76 major languages of the world.  Other items on display included paintings of Arabic calligraphy highlighting the beautiful verses of the Quran. A melodious recitation of the Quran was played on a computer.

Muslims believe that the Quran was revealed to the Prophet Muhammad (peace be upon him) over 1400 years ago. Many visitors were surprised to learn that the Quran contained prophesies and teachings pertaining to modern topics such as: religious freedom, climate change, world peace, pursuit of scientific and technological knowledge, service to humanity and women’s rights. 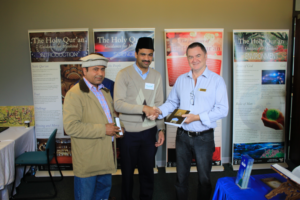 Organisers distributed free literature and leaflets about the Islamic faith and answered many questions about Islam that people may have. Imam S. Wadood Janud, Imam of Ahmadiyya Muslim Community Victoria and Tasmania, met with many visitors and shed light on the basic teachings of Islam. He said:

“In the current political and social climate of the world exhibitions such as these are necessary to raise awareness and educate others about the true teaching of Islam. It gives an opportunity to everyday Australians to actually see, hold and interact with a Quran, Holy Book of Muslims. The response we have had from local communities is inspiring. Through events like these we are truly breaking down walls of ignorance and building bridges of harmony and understanding. ”

“I support everybody. It is important that everybody be recognised, included and be part of the community. I am more than happy to come along.”

When asked about what he had learnt about Islam through the exhibition, Cr Beardon remarked:

“It is what I expected, a very harmonious religion and I am happy to be supportive.” 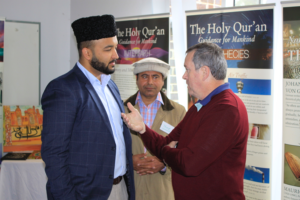 Kasuni Mendis was among the many young visitors to the exhibition. She said that she had been invited by City of Casey’s Councillor Rex Flannery to learn about Islam. Speaking on what motivated her to attend the exhibition, Kasuni Mendis said:

I think that it is important for young people especially to be open and have an open mind about everything in our world really. I wasn’t sure if I had any questions about Islam but it is good to learn things that we might not know about. I did have a good idea of what Islam is but it is obviously good to learn about smaller kinds of theories and teachings of Islam just to broaden our knowledge.

“Because my previous experience with the Ahmadiyya in this area at least has always been really positive so I wanted to come down and show my face and support of what these guys are trying to do.