Muslims for loyalty are handing out half a million leaflets across the country in early Australia Day celebrations to end extremism and prejudice.

‘Love for all, hatred for none’ is the motto the Ahmadiyya Muslim Association are hoping to share with fellow Aussies this year, through leaflets adorned with the national flag. 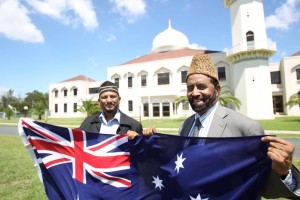 The Ahmadiyya Muslim Association Australia is welcoming the community to join them to celebrate Australia Day at the Baitul Huda Mosque in Marsden Park.

Celebrations will begin at the mosque at 10am, and will include a flag-raising ceremony, the singing of the national anthem and a complimentary barbecue.

“It’s not just for Muslims — we would love other members of the public to come and enjoy it with us,” he said.

“We have sent more than 600 invites to non-Muslim people: churches, synagogues, Indian temples and to all MPs in Australia.”

Among those expected to attend are Berowra federal MP Phillip Ruddock and Greenway federal MP Michelle Rowland along with Blacktown mayor Stephen Bali.

In the lead-up to Australia Day, the association started a nation-wide campaign to show its loyalty to Australia.

Its members have been busy delivering 500,000 “Loyalty to Homeland” leaflets all over Australia.

The intention of the ‘Loyalty to Homeland’ leaflets is to profess the Ahmadiyya movement’s love of Australia, with the Holy Prophet Muhammad’s declaration that: ‘Love of one’s country of residence is part of faith’. 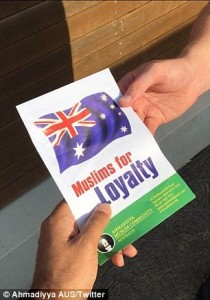 ‘The idea [behind the leaflets] is to instil in the hearts and minds of the children that love of a country of residence, their homeland, is part of their faith,’ Mirza Ramzan Sharif, a national Ahmadiyya spokesperson, told Daily Mail Australia.

He said the community had been celebrating Australia Day for more than a decade, and that loving one’s place of residence had been part of their faith for 1,400 years.

Mr Sharif said the leaflets were intended for both Muslim Australians and those of different faiths, to educate the community for this message of peace.

‘Identifying ourselves with the identity of this country,’ was another driving force behind the leaflets, he said.

‘In the last few years there is heightened things happening across different parts of the world, and I think education and information is much needed during this time,’ Mr Sharif told

Anti-Islamic sentiment has grown in Australia over the past year, with the rise of Islamic State attacks and the shooting death of police accountant Curtis Cheng, killed outside
Parramatta Police Headquarters by radicalised 15-year-old Farhad Jabar.

In the wake of those attacks, far-right fringe groups, such as Reclaim Australia, have held rallies across the country to denounce Islam. 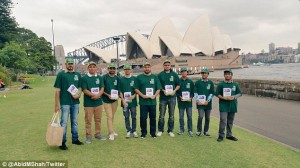 As with many Australians, the Ahmadiyya faithful will be hosting barbeques and raising the flag at Mosques across the country on Tuesday the 26th, and will be joining other community events to share the remainder of their 500,000 leaflets.

The Ahmadiyya Muslim Association has invited the community to the Baitul Huda Mosque in Marsden Park, western Sydney, on Australia Day to participate in their celebrations from 10am.

‘Let us celebrate our national day with a new commitment to serve and protect this beautiful country and help make it one of the greatest countries of the world,’ National President of the Ahmadiyya Muslims Association Australia, Inamul Haq Kauser, said.