The Ahmadiyya Muslim community celebrated Remembrance Day by making a giant, human poppy out of red and black fabric in the parking lot of the Baitun Nur Mosque – recognizing the sacrifice of Canada’s veterans.

“We as Muslims believe we have to be faithful to the country where we live,” said Sultan Mahmood, spokesperson. “A loyalty to the homeland is part of our faith. We, being Canadians, feel duty-bound to pay homage to our fallen soldiers and those who fought for us.”

The community has been publicly honouring veterans on Remembrance Day for five years, but this is the first year they attempted the human poppy.

Mahmood said events like these can help fight misconceptions that minority communities do not place as much value on events like Remembrance Day.

“The reason is, sometimes we do not really openly demonstrate,” explained Mahmood. “So some people think, perhaps our community is not concerned about it. But I’m confident many minorities do have these sentiments, and they do appreciate the sacrifice given by our soldiers. 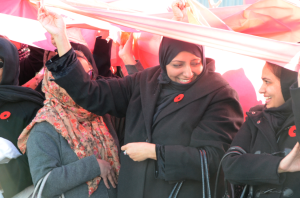 Mahmood said he has been in Canada for 23 years, and has proudly worn a poppy on his chest. The community also took part in the poppy campaign and took donations for the veterans’ food drive.

Ric McIvor, interim leader of the Alberta Progressive Conservatives, said that the event was a wonderful opportunity to set the record straight.

“What’s important is the Ahmadiya Muslim community wanted to publicly express their support for Canada, and more specifically for Canada’s men and women who serve to keep this country free and the veterans who served,” he said. “This, to me, is a public expression of solidarity with Canada.”