The Ahmadis have been long the subject of extreme animosity and defamation by other sects of Islam within Britain and for years have dealt with physical as well as a verbal abuse from Muslims who consider them heretics.

The Ahmadis migrated to Britain to escape the persecution in countries like Pakistan where their faith has been declared illegal by law. However, Britain has not stopped the extremists from hunting them down, Just this year an Ahmadi shopkeeper was stabbed to death in Glasgow. While physical violence against the Ahmadis is a recent occurring in Britain, Hate speech and a smear campaign against the community has been going on for years, all the guise of ‘Free Speech’.

The new Muslim media which claims to “counter” the negative image of Islam in Britain seems to play an active part. A textbook example of such hate is a UK based website 5PillarsUK. The site editors and contributors have long run a hate campaign against the Ahmadis based on what they claim to be their “heretic beliefs”. Despite claiming to be the vehicle of independent writing and the non-biased reporting of national affairs, they have long neglected the concept of what independent writing actually is.

When the Ahmadi-run Bait ul Futuh Mosque caught fire last year, 5PillarsUK was quick to put up a news report, referring the Mosque as a Temple. Many of the site viewers commented on the facebook post thanking the editors for using the “correct title”. 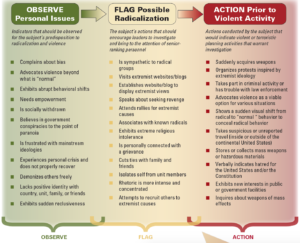 By calling West Europe’s largest Mosque a “temple” 5PillarsUK and it’s editor Dilawar Hussain has continued to tick all the boxes of being a radical extremist. The unclassified “Radicalization into Violent Extremist Guide” for Military leaders lists several symptoms which act as radicalization indicators, some of these indicators include:

Dilawar (Dilly) Hussain fits in all the of the above. His website 5PillarsUK’ mission statement says:

“We believe that Western/Israeli foreign policy is the main cause of the disasters afflicting the Muslim world. Yet we also believe strongly that the Ummah should be prepared to look at itself in the mirror and ask difficult questions.”

Responding to a question about ISIS on a BBC Show, Hussain said: ” One person’s terrorist is another person’s freedom fighter ” .

While 5PillarsUK claims to be “non-sectarian”, the site content speaks otherwise. The statement on the website reads:

“Takfir and sectarian insults between different Muslim groups will not be tolerated.”

Unless of course that insult is directed towards the Ahmadis, and in that case, it is the most righteous thing for a believer to do.

The site’s editors including Roshan Mohammad Saleh & Dilly Hussain have long demonized and insulted those who disagree with their radical version of Islam. 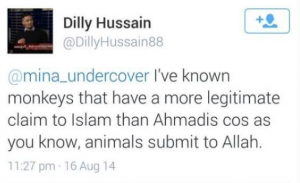 His website 5Pillars also favourably to the rhetoric of extremist organisation Hizb-ut-Tharir which according to them is “working for the re-establishment of the Caliphate”.

“The Olympic gymnast Louis Smith has begun his education on Islam by visiting a sect that the majority of the Islamic world do not consider to be Muslims.”

Before taking another read at 5PillarsUK’s “news reports” one should consider the widespread bigotry and hate that is not unchecked by purposely added into this radical Muslim publication, which might turn out to be a stepping stone for future extremists.