The Rape Culture We Accept but Shouldn’t

“Rape is the only crime in which the victim becomes the accused.”
The above quote is by Freda Adler, now it doesn’t matter who she is, but it does matter about what she said.

Let’s look at our first case. Filipino maid dies after pointing a finger to her boss when asked who raped her.  Imra Edloy, a 35-year-old died on 13th August. It is unclear as of now if her death correlated with her wounds due to maltreatment. Reading this you would think that the perpetrator is the boss, wouldn’t you? What other explanation is there? Let me show you a quote from Independent “While she was unable to identify her attacker, before falling unconscious she pointed at her employer when asked who abused her, ABS CBN News reports.” Here is a quote from the reports that the Independent refers to “Bello said Edloy had implicated her employer in the assault. Prior to becoming unconscious, while she did not say outright that her employer sexually assaulted her, she pointed to her employer when asked by a nurse who had maltreated her.” Both the Independent and ABS use words of “unable to identify” and “did not say outright”. They’re basically saying “while the victim pointed a finger to her boss after being asked who raped her we’re still not sure if that’s what she meant”.

Let’s take a look at an earlier case. The infamous Brock Turner case. This case had been going on for well over a year when the judge declared Turner guilty but only gave him 3  months in prison. This is what Santa Clara County Superior Court Judge Aaron Persky had to say about his decision “A prison sentence would have a severe impact on him, I think he will not be a danger to others.” His father wrote a letter to the judge condemning his son’s crime as “20 minutes of action”. Apparently when his son invaded the body of another human while she was drunk and could not even form coherent sentences was not only not a bad thing but only “20 minutes of action”. Then something remarkable happened the victim wrote an open letter to the judge and read it out to Brock Turner. 12 pages of everything she went through, the questions she was asked, the trauma that she went through, the way she saw society blame her, the way she saw society be lenient towards him because he was a college boy and his swimming times were more important. I read that letter, a few days after it came out, I came across it at half past midnight, I still can’t describe the feeling of anger and this other feeling of speechlessness and overwhelming-ness that I felt. Here are some of the questions that were asked by the authorities to her that can be found in her letter. I remember not being able to do anything after reading that letter, feeling baffled at the questions asked and the amount of privileged treatment given to Brock Turner.

Let’s look at our last and most recent case. David Becker, 18-year-old, just graduated high school, guilty of sexually assaulting a female while she was asleep, thought he could do it because there was no retaliation or any indication from the other body to say no or stop. He gets no jail time and only has to serve two years of probation so he can “enjoy the college experience”. He doesn’t even have to register as a sexual offender because apparently “Labelling him ‘David the Rapist’ is truly an unjust character assassination of what this individual has accomplished in the past,” words spoken by his Attorney Thomas Rooke. Why does it matter what he did in the past, it shouldn’t matter if this guy was living legend, he still sexually assaulted a female while she was sleep and justified by saying there was no indication or response to stop. Rooke also went on to say that “Putting this kid in jail for two years would have destroyed this kid’s life.”, what about the woman he raped? What about her life?  Here is a quote from the letter that was written by the victim from the previous case and it describes her feelings a few minutes after finding out she had been assaulted, “My brain was talking my gut into not collapsing, because my gut was saying ‘help me, help me’”. According to rain.org, 94% of women suffer PTSD two weeks after the rape and Approximately 70% of rape or sexual assault victims experience moderate to severe distress, a larger percentage than for any other violent crime.

The three cases, in all three the perpetrator is given leniency, either there was no clear indication from the victim who the sexual offender was (case 1) which I’m pretty sure pointing a finger at someone is a pretty good indication, or the sexual offender was young and still had his whole life to live ahead of him so “20 minutes of action” should not ruin his life, even though it ruined the life of another person, or maybe he had just graduated from high school and he should get to “enjoy a college experience” even though he just sexually assaulted another person, female or not.

Maybe the reason we give so much leniency to sexual offenders is because a lot of the accusations are false, maybe we accuse the victims because they just want to ruin other’s lives and there was no actual sexual offense caused by anyone. But that would not be true. Because there are no stats to show that. I researched and there is a great deal of controversy over this, but there are no official or decided upon stats. The 2-8% stat of rape cases being false is simply not true. That is a story for another time. The point being, we always try to accuse the victim or downgrade them, as if the victim doesn’t have a life to live and look forward to and the offender does. And yes there are cases that in which the accuser is lying and wants to ruin the life of the accused but thinking or having a collective mindset of perceiving every case like that is highly ignorant and narrow-minded.

These are not the only three cases, though, in England and Wales roughly 11 adults are raped every hour, that’s men and women included. 1 in 5 women are rape between the ages of 16-59. These stats are from rapecrisis.org.uk.

All the above cases involved female victims but I’m afraid to say that male victims are treated worse. There is this level of “masculinity” that males have to achieve. Males weren’t rape victims until Sexual Offences (Scotland) Act 2009 and Sexual Offenses (Northern Ireland) Act 2008. In Wales and England Females still cannot be charged with rape, they can only be charged with other sexual assaults. Callum Carson raped in 2005, when he reported it to the police officer his response was that it was his first time in 15 years of his work dealing with this kind of thing. 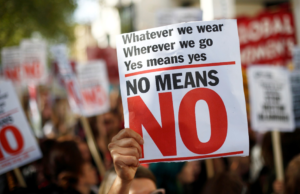 The rape culture that we live in, well we shouldn’t. We shouldn’t allow ourselves to be in this cage of masculinity or this “I’m the victim so I must be guilty” social construct. Just because of how much you wear or how much you lack clothes or how much you had to drink or if you’re conscious or not, all of those shouldn’t mean that non-consensual intercourse is allowed. The victim should not become the accused. I’m 15 years old if I can understand that, so can you.

Shaoor Ahmad
Shaoor Ahmad is a 15-year-old writer from Britain who likes to keep up with current affairs and loved break down social constructs. @     Facebook