The Thai Committee for Refugees said the release on bail of 96 members of Pakistan’s Ahmadiyya Muslim sect was the first such large-scale release of refugees who Thai authorities locked up merely for being refugees. The group negotiated the release with the state National Human Rights Commission and immigration officials.

The detainees, about a third of whom are children, were arrested last December even though all but two were granted official refugee status by the United Nations because they face persecution in their homeland, where they are considered non-Muslim.

"We are feeling very happy … like a bird in a cage when it comes out," said Mehmood, a freed 35-year-old refugee who declined to give his last name. "But we should not say about inside."

"Love for all, hatred for none, that is what our religion teaches," he said. "Whatever the situation, you should always hold onto your ethics and obey the officials wherever you are. That is what we tried to do inside this detention centre."

The committee said conditions in the detention centre had been described as "overcrowded, inhumane and unhygienic," with more than 150 people having to share cells designed for 30 to 40.

“In the women’s cell there were times when women had to stand so that some of them could sleep,” said Anoop Sukumaran, coordinator of the Asia Pacific Refugee Rights Network.

"The UN refugee agency believes no refugee should be locked up simply for being a refugee, so we applaud any measure that gets refugees out from behind bars," said James Lynch, UNHCR’s Representative for Thailand.

“The children were often sleeping next to the toilets, which were overflowing with feces and urine. The conditions, to say the least, were horrific at some points.”

The Ahmadiyya practitioners fled to Thailand from Pakistan, where they are persecuted as heretics to Islam. Earlier this year, police in Bangkok arrested the 96 during several immigration raids from December to February. 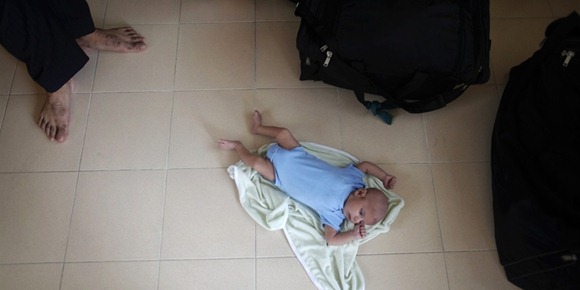 Asfa, a one-month-old girl born in a detention centre, is pictured among bags as her father, a Pakistani refugee who is a member of the Ahmadiyya, an Islamic minority sect, stands in their new accommodation after their release from detention in Bangkok on June 6.

The U.N. Refugee Agency, the UNHCR, welcomed their release. Spokeswoman Kitty McKinsey said they should not have been arrested in the first place.

While they are on bail, the Ahmadiyya are being housed in Bangkok until they are resettled to a third country.