Sacking of Nawaz Sharif – Writing on the Wall 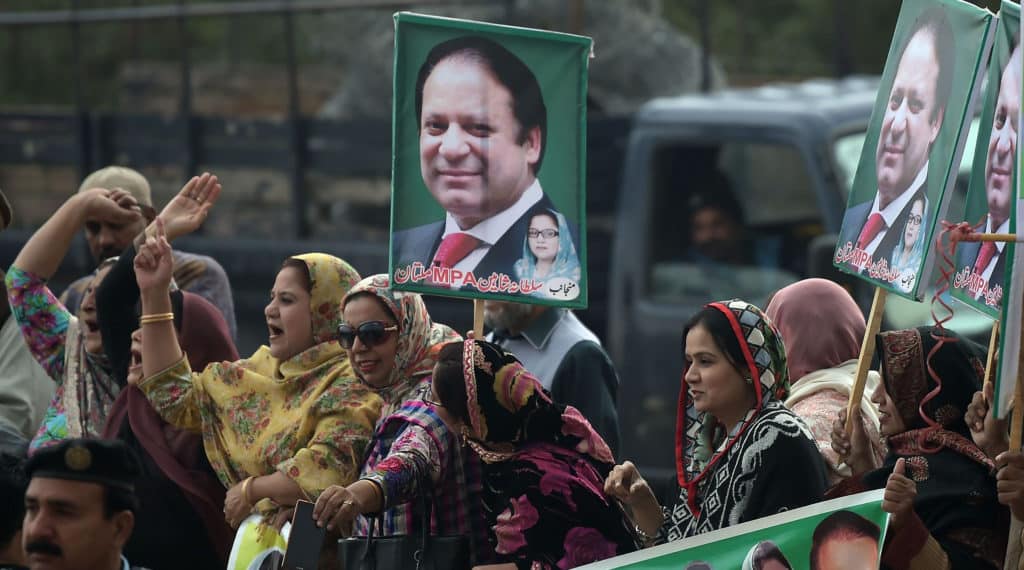 Even a cursory analysis of the three Nawaz Sharif sackings as PM reveals one constant sordid fact, his incurring penchant to listen to a bunch of “unelectable advisors” who constantly feed his already inflated ego about his supposed omni-potency. The 1993 sacking did him wonders, turning an Establishment “puppet on the throne” into a politician of some standing in his own right. In the second sacking in 1999 the Army swiftly countered Nawaz’s civilian coup, the Punjab CM brother Shahbaz Sharif was put into handcuffs lost out for no fault of his own. Shahbaz survived the last sacking in 2017 a year ago, giving the workaholic a unique opportunity to show off his development projects, mostly in Lahore, and shrug of Nawaz’s charismatic giant shadow to lead a political life of his own. Maryam had nothing to do with Nawaz’s second sacking, everything to do with his third.

Suffering for years because of his elder brother’s impetuosity, Shahbaz’s future must now contend with Maryam’s ambitions. Couple this with the obstinacy Maryam inherited from her father and it makes for a devastating landmine bang in the middle of Shahbaz’s once sure path to the PM’s office. The irony is that Nawaz Sharif’s popularity among the masses propelling Shahbaz to a prime political standing notwithstanding, his brother’s stupidity will probably keep Shahbaz from the PM’s office. Despite his son and political heir Hamza being as corrupt as they come, Lahore has certainly far more to show in socio-economic infra-structure improvements than any other city.

Sharif turning all his guns on the Army that initially sponsored his political career and ensured his upward rise is quite understandable. Serving to camouflage an inherent inferiority complex our culture promotes biting the hand of our benefactors. Is Maryam’s hatred for the uniform out of deep-rooted psychological resentment against her ex-soldier husband, how many times do we see husband and wife together? By extensive use of the social media, Maryam relentlessly attacks those she perceives as opponents to her inheriting her father’s political crown abdicated by her two apolitical brothers. Nearly coming to grief over the “DawnLeaks” should have taught her some lessons. Being good looking and courage is a potent political combination for female politicians in any country, one still cannot even remotely compare her with Ms Benazir. The former PM had not only had the brains to match her political acumen but could reach out with respect to both friend and foe alike. Maryam’s arrogance has not only damaged her family and friends but has put into shambles the political potential of what still is the largest political party in Pakistan, at least till July 25.

Despite the virulent attacks by Nawaz Sharif, Maryam and a few unelectable Advisors, the Army has kept its cool, and should keep doing so. What the Nawaz Sharif gang wants desperately is the Army to intervene, despite grave provocation the Army has not obliged them. The PML (N) then turned its guns on the superior judiciary, refusing to be cowed down by their outright threats and intimidation, finally did what the people of Pakistan have been hoping and praying for 70 years they would, apply the rule of law equally on the rich and powerful as they have done over the years on the poor and under-privileged.

Nawaz Sharif’s extensive involvement in money-laundering and conviction thereof is an open and shut case barring a few technical contradictions. If the rule of law is to prevail, justice cannot be served by applying the wording of the law (and its various interpretations) but by upholding the spirit of the law once one is satisfied that the individual is guilty and hiding behind legal technicalities served by clever, unscrupulous lawyers. Those who root for Nawaz Sharif will also continue to do so, despite his conviction those against him will remain against him. The drawing rooms are of the opinion that Kulsoom Sharif on the ventilator generates sympathy that can sway the individual voter. On the other hand the vast majority of those presently “undecided” tend not to vote for a criminal.

Incidentally the problems for Mian Nawaz Sharif will grow exponentially. Consider the UK Chapter of Transparency International (TI) asking the British government to investigate Nawaz Sharif’s known London assets. Reacting to corruption charges related to four London properties. Head of Advocacy at TI UK, Rachel Davies Teka said: “We are calling on the UK authorities to investigate the London-based assets identified in this conviction and ensure that Mr Sharif and his family are no longer able to enjoy any luxury homes that are found to have been bought with the proceeds of corruption. Furthermore, we believe the UK must look into any other potentially criminal UK-based assets owned by the Sharif family.” The recent passing of legislation requires British Overseas Territories to publicly reveal the true owners of companies is a key step towards preventing the purchase of UK property with suspicious wealth. The UK must now ensure it follows through on this legislation, so that we no longer need to rely on leaks like the Panama Papers to reveal cases such as this one” and no longer provide a safe haven to Nawaz Sharif and his family.

What Rachel Davies is suggesting is just tip of the iceberg. Zardari is the central figure in a huge money-laundering case, consider the assets Asif Zardari (friends and family) have acquired abroad through illegally acquired income transferred abroad. While one feels very sorry for my good friend Husain Lawai, his unfortunate misfortune is to have become the banker of a vile creature like Zardari because of the new laws, Nawaz Sharif, Asif Zardari etc cannot camouflage their assets behind offshore companies anymore. The declaration of assets by Zardari represents Hans Andersen’s fairy tales. UAE National Mr Nasser Lootah is a very nice man who has graciously hosted Pakistan politicians and bureaucrats out of power for decades in Dubai. Where money-laundering is concerned, this honourable person will not lie, the SC should ask Nasser Lootah how much is his investment in Summit Bank and how much is Zardari’s?

Given the amount of evidence piling up, and most of it has to do with blatant criminal and why, Zardari will be convicted because of money-laundering and all his assets abroad will be subject to confiscation and the proceeds returning to Pakistan. The writing is on the wall for those who blatantly looted the country’s wealth, will the Supreme Court and NAB continue to persevere with their duty by this nation?