A Virginia man linked to CAIR and the controversial Dar Al-Hijrah Mosque has been exposed as an extremist sympathizer after promoting extremist ideology in the U.S and encouraging murder.

Zamir Ali Akhtar Kiani who resides in the Fairfax area is a regular at the infamous Dar al-Hijrah Mosque. It is the same Mosque where Al-Qaeda cleric Anwar Awlaki, served as an Imam (Preacher) from 2000 to 2002. Awlaki is known to have counseled at least two of the 9/11 hijackers. On two separate occasions, Kiani spoke to HiSpan TV in support of the Dar Al-Hijrah Mosque, Once in 2014 and then again in 2015.

The behavior came to light after 56-year-old Zamir Ali Akhtar Kiani began posting messages in support of Pakistani killer Mumtaz Qadri. In 2008 Qadri shot Pakistani Minister Salman Taseer 28 times for speaking out against the controversial Blasphemy law. In one of the pictures, Kiani can be seen standing in what looks like a classroom with a message “O Prophet We are with you, Martyr Mumtaz Qadri”. The message is in support of Qadri who was hanged by Pakistan in February.

Kiani’s Facebook profile is filled with posts in praise of Qadri and his mentor Cleric Khadim Hussain Rizvi, who is the founder of “Tehrike Labbaik Ya Rasolollah” movement. In January the cleric and the movement’s leaders were charged under Pakistan’s anti-Terrorism act for organizing a rally in support of killer Mumtaz Qadri.

The cleric Khadim Rizivi also played a key role in counseling another killer in Scotland. Tanveer Ahmad stabbed and killed an Ahmadiyya Muslim in March this year for disrespecting Prophet Muhammad. Cleric Rizvi has openly called for the killing of blasphemers and those who disrespect Prophet Muhammad.

Followers of the Ahmadiyya branch of Islam are considered heretics by some Muslims, and some extremists believe that the Ahmadis deserve to be killed for committing heresy. The Ahmadis are severely persecuted in Pakistan and several other Muslim countries, many have sought refuge in North America & Europe. 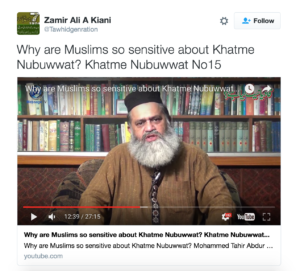 Kiani shared another video titled “Why are Muslims so sensitive about Khatme Nubuwwat?“. In the video, a Muslim cleric calls for the murder of the moderate Ahmadi Muslims. The cleric Mohammed Tahir Abdur Razzaq, whose sermon Kiani shared is part of the “Khatme Nabuwat” extremist group. The group was exposed by the BBC after it distributed leaflets which called for the murder of minority Ahmadiyya Muslims in the UK. The KhatmeNabuwat group has also been at the forefront of Ahmadiyya persecution in Pakistan.

Kiani’s social media is not only filled with praise for the clerics and the killer but also loaded with continuous threatening messages against the more moderate Ahmadiyya branch of Islam. Ahmadiyya is one of the oldest and most peaceful Muslim communities in the U.S. 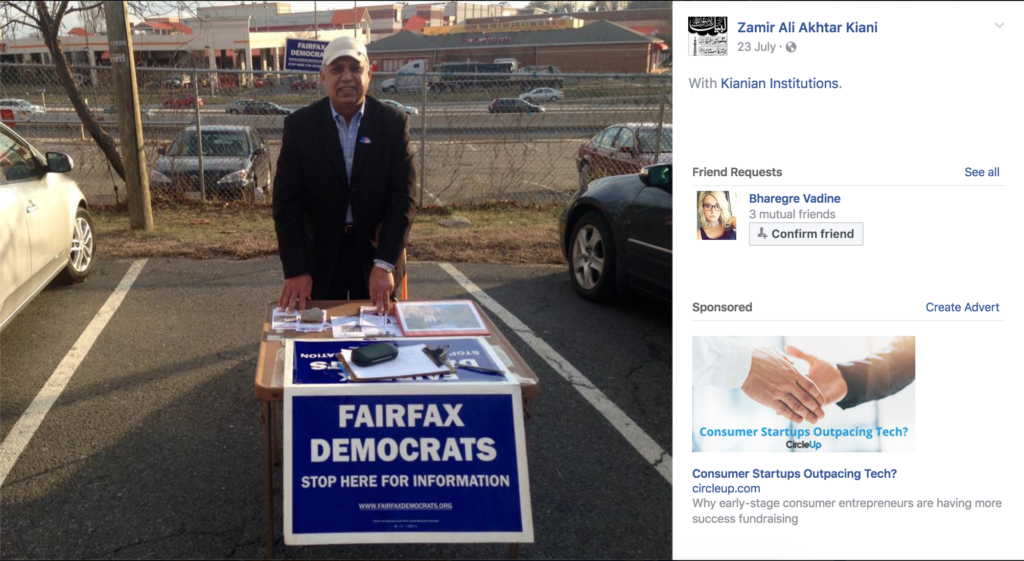 In November 2015 he met with CAIR director Nihad Awad and Congressman Don Beyer at the Dar al Hijrah Mosque in Virginia.

In a separate picture, Kiani can be seen holding what looks like a Quran in front of the White House. 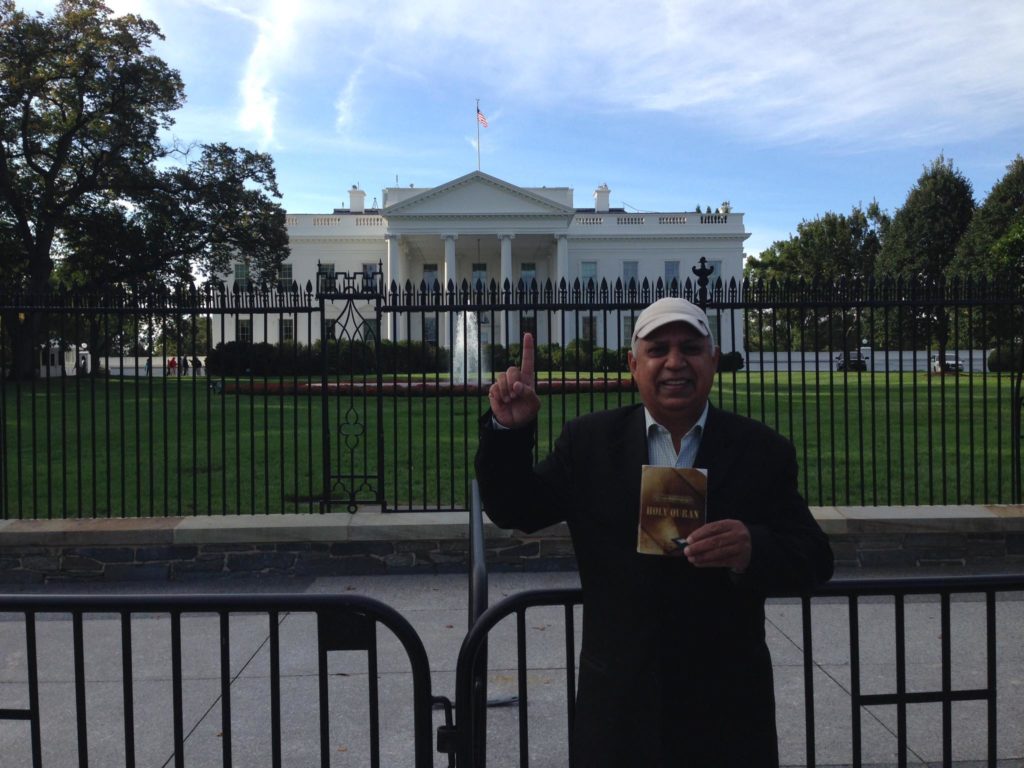 Kiani’s Twitter followers include Pakistan’s PTI (Pakistan Tehreek-e-Insaf), a political party known to have a soft side for the Taliban and whose leader Imran Khan has spoken out against Pakistan’s Ahmadis.