Imran Ahmad Khan has become the first Ahmadi to be elected as a British MP after his historic UK General Election win. Khan won from his home constituency of Wakefield by gaining 21,283 votes. 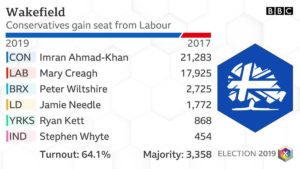 Imran Khan beat Labour’s Mary Creagh by 3,358 votes, Creagh lost her seat after 14 years in Parliament. His win is historic both for United Kingdom’s Conservative Party and the Ahmadiyya Muslim Community to which he belongs. Under Khan’s leadership conservatives won the Wakefield seat for the first time after 87 years, and the Ahmadis for the first time have a man in British Parliament.

Imran Khan is also related to Karim Asad Ahmad Khan, who was recently appointed by the United Nations to lead an investigation into ISIS crimes in Iraq.

I was born in Wakefield and went to school here. I am a proud Yorkshireman. You may remember by late father, he was Wakefield’s only consultant dermatologist. My English mother trained in Wakefield as a State Registered Nurse and midwife, and my grandmother, Joyce Reynolds was a Staff Sister at Pinderfields.

After his election win Khan paid a visit to the local Ahmadiyya Mosque and met local community members. 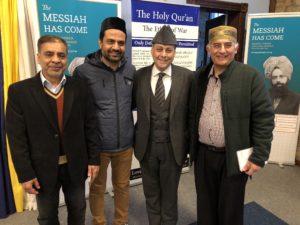 Congratulations, best wishes and prayers for success in building a peaceful world to @imranahmadkhan, on becoming Member of Parliament for Wakefield. Imran Ahmad-Khan is the first-ever member of Ahmadiyya Muslim Community elected as a Member of British Parliament. pic.twitter.com/8KGoZUKec2