The Sir Zafrullah Khan Lecture organized by ICSR – The International Centre for the Study of Radicalization in conjunction with the Ahmadiyya Muslim Community took place in the famous city of London on Monday 3rd October 2011.

The event held at Kings College University’s council room was well attended by a packed audience of around lawyers, Politicians, Senior Police Officers, Academics and other interested observers.

Co Director of ICSR Dr John Bew welcoming attendees to the event congratulated the Ahmadiyya Muslim Community for its role in tackling extremism and for its humanitarian projects.

Honourable speaker and the Governments advisor on counterterrorism since 2001 Rt Hon. Lord Carlile of Berriew Q.C commenced his address by praising Ahmadiyya Muslim Community for its positive engagement and principled stand against terrorism.

The winner of the first International Zafrullah Khan Essay Competition Ms Iona Ebben was presented with a prize of £1000 by Lord Carlile.The essay was on the title ‘The answer to Pakistan’s sectarian crisis is reviving Jinnah’s vision for the country.’ Do you agree?

There was also a good Questions & Answer session in which Lord Carlile was critical of the UK Immigration Laws that allowed terrorists to stay in the country.

“The real fault lines are in Politics in the Middle East and South Asia I think we are going to see a considerable change in the nature of Governments in that region as we have in Central and Eastern Europe in the years that have passed. I think those political fault lines will help to resolve the current terrorism problem.” 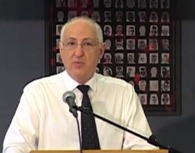 He also commented that the expression of war on terrorism had done more harm than good and that there should be greater emphasis on strengthening international criminal justice systems.

Lord Carlile added that the laws on incitement to terrorism should be strengthened so that even where there was no direct involvement people who promoted violence even via the internet or Satellite Tv should be caught by the law.