By Jerome Taylor, Religious Affairs Correspondent For The Independent

Islamic extremists have started openly calling for the destruction of a controversial Muslim sect in a major escalation of sectarian conflict within British Islam, an investigation by The Independent has revealed.

Members of the Ahmadiyya Community have seen a significant upsurge in threats and intimidation over the past four months, sparked by an extremist attack on two of their largest mosques in Pakistan earlier this year.

Hardline Islamists in Britain have been distributing leaflets calling for the murder of AhmadiMuslims in Kingston-upon-Thames whilst mosques have been vandalised in Newham and Crawley. Preachers in south London have also been orchestrating a boycott of Ahmadi businesses and Ofcom has had to reprimand an Islamic satellite channel for repeatedly calling the sect "Wajib-ul Qatal" – an Arabic phrase used to describe those who digress from mainstream Islam that translates as "liable for death".

Community leaders say the upsurge in animosity towards Ahmadis is directly linked to violence in Pakistan where local Taliban militants have declared war on sects that they deem to be heretical such as the Ahmadis and the Shi’a.

Although the Ahmadis have been targeted by extremists in the past, the combined attacks on two mosques in Lahore in May was the most brazen assault on their community yet, with 93 worshippers killed as they gathered for Friday prayers, including a number of Britons.

Since the mid 1980s the Ahmadi community has been headquartered in Morden, south London, after their leaders were forced to flee Pakistan, the only country in the world that legally forbids them from declaring themselves Muslims. They claim to have 70 million adherents worldwide although detractors say the number is closer to two million. An estimated 15,000 live in Britain including their spiritual leader Hadhrat Mirza Masroor Ahmad.

The Ahmadi leadership had hoped the attacks in Lahore would prompt an outpouring of sympathy among British Muslims. Instead, they say, it has emboldened a minority of extremists to openly target them in an upsurge in intimidation.

Rafiq Hayat, national president of the Ahmadiyya Muslim Community UK, told The Independent: "Through leaflet distribution, posting of hate material on websites and via programmes on satellite TV (often in Urdu and other south Asian languages) our community is being made a target of hatred and hostility by preachers of hate. The perpetrators of this act are Muslims and whilst they are certainly not representative of the vast majority of Muslims in this country, they are creating hatred in society."

Police in Kingston-upon-Thames have opened a hate crime investigation earlier this summer when an Ahmadi woman was handed a leaflet by a man which stated: "Kill [an Ahmadi] and the doors to heaven will be open for you." In Tooting, meanwhile, some mainstream Sunni preachers have urged follower to boycotts Ahmadi businesses.

To many orthodox Muslims, the Ahmadis are considered heretical because they believe that their 19th century founder was none other than the Mahdi – Islam’s equivalent of the messiah – and the successor to the Prophet Mohamed.

Islamic satellite channels, a rapidly expanding but largely unregulated section of the broadcast media, have played an instrumental role in recent anti-Ahmadiyya campaigning. This week Ofcom criticised the Ummah Channel for a string of three programmes broadcast shortly before and after the Lahore massacre in which clerics and callers alike said Ahmadis should be killed.

In one programme "Seal of the Prophethood" a cleric declared: Until now, whenever one has claimed to be a prophet the Muslim nation has issued fatwa that he should be killed. It is only that at present Muslims are weak and they do not have the power to slice such a man in two parts."

On 21 May the Ummah Channel broadcast a in which Islamic scholars debated the status of Ahmadis within Islam.

When a caller named Asim asked for a scholar to explain whether Ahmadis were legitimate Muslims the imam replied: "Since the time of the Holy Prophet (peace be upon him) the Sahiba [knowledgeable scholars] have confirmed that anyone who believes in a prophet after the Holy Prophet is a kafir [unbeliever], murtad [apostate] and Wajib-ul Qatal [liable for death]."

He later added: "Until now, whoever has claimed prophethood, the Muslim Ummah has issued the fatwa for them to be killed. And all these false prophets have always been killed. It is only now that Muslims have become weak and they do not have the strength that they should cut such people into two."

Ahmadis were also frequently referred to as "filth" who should be avoided by mainstream Muslims.

Ofcom ruled that the Ummah Channel breached broadcasting regulations with its "abusive treatment of the religious views and beliefs of members of the Ahmadiyya community".

A representative of Ummah Channel said the station has now broadcast apologies for the programmes. "The Ummah Channel would like to express their sincere apologies for any offence caused," the spokesperson said. "It was never the intention of the Ummah Channel to support or condone these opinions that were delivered by independent scholars during ‘live’ phone in shows."

The Ahmadis say that doctrinal opposition towards their community is being spearheaded by Khatme Nubawwat Academy, a British offshoot of a Pakistani group that is dedicated to confronting Ahmadi beliefs.

The group, whose name translates to "The Finality of the Prophet", has close connections to the Pakistani establishment and met Pakistan’s high commissioner in the UK earlier this summer.

They also held a conference in Newham on 18th June in which one of their speakers claimed that the attacks on the two mosques on Lahore were an Ahmadi conspiracy. 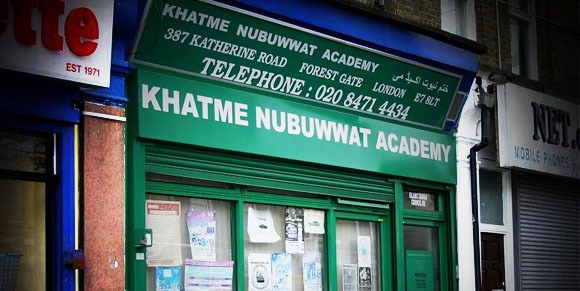 Imam Suhail Bawa, a leading Khatme Nubbawat preacher, told worshippers: "This will become apparent very soon to you all that Qadiani [a derogatory term for Ahmadis] themselves are behind this whole conspiracy. [They] are responsible for whatever has happened in Lahore. This is all Qadiani conspiracy. They now come to television programs to try to "falsely" demonstrate their victimisation."

He then went on to warn that any attempt to try and change laws in Pakistan which forbid Ahmadis from calling themselves Muslims would be met with violence on a similar scale to a previous massacre of Ahmadis in 1953 in Lahore.

"If the anti-Qadiani laws or the blasphemy laws are touched by anyone in Pakistan," Imam Bawa said, "then the 1953 Lahore agitation against the Qadianis will be repeated in the streets once more. The streets and roads of Lahore were filled with blood in that agitation."

On the website for the group’s east London offices in Forest Gate, Ahmadis are described as "nothing but a gang of traitors, apostates and infidels". The term Wajib-ul Qatal is not used although their preachers in Pakistan often use the term. 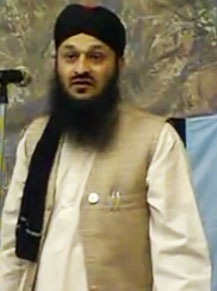 Akber Choudhry, a spokesperson for the Khatme Nubawwat Academy, said: "[We are] an independent UK organisation that is loosely affiliated with other such organisations around the world, and one of their major goals is to counter Qadiani (Ahmadiyya) propaganda within the laws of the jurisdiction in which each such organisation is based. We condemn all atrocities being committed in Pakistan and it is our wish and desire that Pakistan be free from all war, foreign intervention and attacks on civilians."

Asked whether he thought it was acceptable to describe a religious group as a "gang of traitors, apostates and infidels" Mr Choudhry replied: "The words ‘apostates’ and ‘infidels’ are understood differently in English than in their Islamic theological sense, especially within the Urdu-speaking Muslims, and can be replaced by terms more sensitive to the current climate in which the connotations of these words have changed quite rapidly in the past few years."

But Mr Hayat said he believed groups like Khatme Nubawwat create an atmosphere that encourages ordinary Muslims to be hostile towards Ahmadis.

"Freedom of speech is one thing, but incitement of hatred is another matter altogether," he said. "We appeal to the authorities to nip this in the bud; otherwise this campaign of hatred against Ahmadi Muslims today will tomorrow grow into a threat against other moderate Muslims and indeed the wider society."