In an historic event at the Houses of Parliament, the Head of the Ahmadiyya Muslim Jamaat, Hadhrat Mirza Masroor Ahmad was yesterday invited to address a number of senior members of Government, Parliamentarians and Ambassadors as Justine Greening MP, hosted a reception in celebration of the Khilafat Centenary, which is the system of spiritual leadership that unites Ahmadi Muslims around the world.

The event was attended by over 30 MPs including Rt Hon Hazel Blears MP, Secretary of State for Communities & Local Government; Dominic Grieve MP, the Shadow Home Secretary; Simon Hughes MP, the President of the Liberal Democrats; Gillian Merron MP, the Foreign Office Minister and Lord Eric Avebury who gave the vote of thanks. The event was sponsored by Justine Greening MP, in whose constituency the first Ahmadi Mosque built in the UK, the ‘Fazl Mosque’, is based.

During her welcome address, Justine Greening MP, spoke of how the Fazl Mosque had played a key and vital role in the local community ever since it was built back in 1924. She said that it was indeed a privilege for her that the Headquarters of the Jamaat was based in her constituency. Her comments were echoed by Gillian Merron MP, the newly appointed Foreign Office Minister. She said it was a great honour to meet with the Head of the Jamaat and to be able to mark the Centenary of Khilafat. She said that the work of the Jamaat was crucial because it ‘gave a voice to those who are marginalized. Commenting upon the continued persecution of Ahmadi Muslims in various countries she singled out Pakistan and Indonesia as countries where the situation appeared to be worsening. She said that the Foreign Office was
committed to effecting the safeguarding of Human Rights in all countries.

Hadhrat Mirza Masroor Ahmad, the Head of the Ahmadiyya Muslim Jamaat, used his address to speak about a number of contemporary issues that were affecting the peace of society both in the UK and the world at large. He also spoke about the role of the Ahmadiyya Muslim Jamaat which he said was as the ‘standard bearer and true representative of Islam’. He said members of the Jamaat who lived in the UK were all completely loyal to the country because this was the teaching of the Founder of Islam, the Holy Prophet Muhammad (peace be upon him).

His Holiness began his address by speaking of the great conflict that divided the world today. Wars were being fought in different parts of the world. He worried of even greater problems. He said:

“It is my fear that in view of the direction in which things are moving today, the political and economic dynamics of the countries of the world may lead to world war… Therefore, it is the duty of the superpowers to sit down and find a solution to save humanity from the brink of disaster.”

He said that the only way to avert further hostilities and disputes was for all Governments to act justly with their own people and in their dealings with other countries. He congratulated the British Government for having shown such qualities of fairness in its recent history. He cited its rule of pre‐partition India as an example of its quality of fairness. Only if similar policies were adopted throughout the world could catastrophe be averted.

Turning towards ‘terrorism’ he said that no form of terror or violence was sanctioned in Islam and thus those who justified their heinous acts in its name were causing for the world to be distrustful and even hateful of the religion of Islam. As a consequence of this hate, certain non‐Muslim groups or individuals had taken it upon themselves to attack Islam by defaming the character of the Holy Prophet Muhammad (peace be upon him) and the Holy Qur’an. Such acts he stated could never be right and that a mutual respect for all religions and beliefs was necessary for true peace to emerge.

His Holiness then discussed crime in society. He said Islam’s true teachings were to try and reform those who had done wrong. Revenge and retribution ought never to enter into the equation when debating the punishment of criminals or prisoners of war. Crime also had to be fought at its root cause which was the development of an unjust society. Thus countries had to be free to develop and cultivate their own natural resources without the fear of other more powerful nations exploiting them and this was just as true at an individual level. This was the way forward. He said:

“Those countries that have been endowed with mineral resources should be allowed to develop and trade at fair prices and under open skies and one country should benefit from the resources of the other country. So, this would be the right way, the way that is preferred by God Almighty.”

Finally, His Holiness spoke of the current economic crisis that engulfed the entire world. He said the ‘credit crunch’ ought to be taken as a warning that the western system of interest based capitalism was wholly incompatible with a fair and just society. He said that though interest could appear to increase a person’s capital, in the long term this was never true.

Following the keynote address of His Holiness various other MPs took to the stage. Hazel Blears MP spoke of how she had greatly admired the keynote address which she had found to be ‘pertinent, contemporary and challenging’. She said that the speech that had just been delivered was the type of speech that was rarely delivered by politicians because it was so cogent and clear to the point. The Jamaat’s message of ‘Love for All, Hatred for None’ was as important as it was simple because it was a message that led to unity rather than division. She further mentioned how she brought with her the best wishes of the Prime Minister, Gordon Brown who had personally sent her to attend the event. 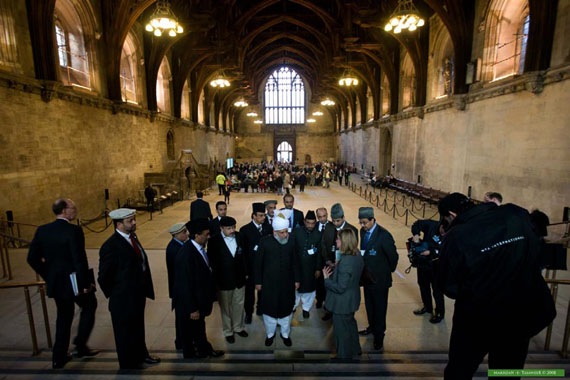 A regular at events hosted by the Ahmadiyya Muslim Jamaat, Dominic Grieve MP, said he took great pleasure at finally being able to host the Jamaat. He praised the Jamaat for its ‘wonderful contribution in all aspects of life’ which he said was due to its policy of integration rather than exclusion. He too said that he took great pride in the fact that the Headquarters of the Ahmadiyya Muslim Jamaat were in London. Simon Hughes MP said that the plight of the Jamaat in various countries illustrated the point that religious freedom had not yet been achieved and that the Government had to work towards bringing about such freedoms in all countries.

The event was concluded by a vote of thanks given by Lord Eric Avebury who spoke of how the keynote address had ‘underlined the moral dimension that we must all follow’. This His Holiness had done by speaking of both conflict prevention and conflict solution. Lord Avebury then spoke of the continued persecution of Ahmadis in Pakistan and said that organizations such as Khatme‐Nabuwat perpetrated hatred against Ahmadis in such a way that people here in the UK could never understand. He concluded by thanking His Holiness for his ‘wise words of wisdom’.

Following the event Hadhrat Mirza Masroor Ahmad was given a guided tour of the Houses of Parliament and held private audiences with Nick Clegg MP, the Leader of the Liberal Democrats and Lord Bishop Nazir Ali. 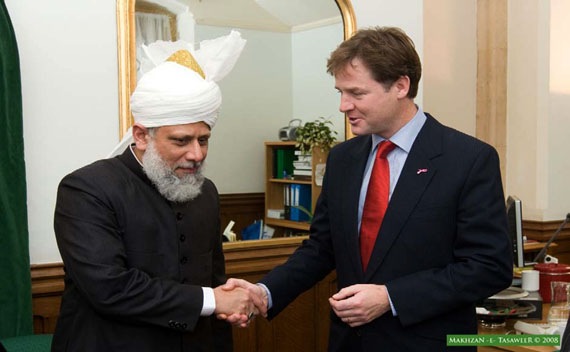 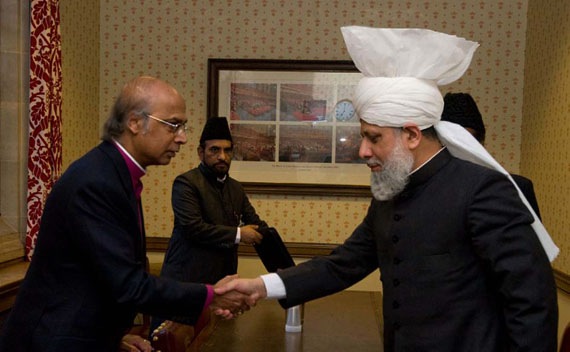