The dangerous rift in south London’s Muslim community has been likened to the "beginnings of the Holocaust".

Lord Avebury the long serving vice-chairman of the Parliamentary Human Rights Group, said the extremist views were being “imported from Pakistan" and compared the vilification of Ahmadiyya Muslims in south London with the beginnings of the Holocaust in Nazi Germany.

Our investigations have revealed that in recent months Ahmadi residents, businessmen and politicians have been actively demonised and ostracised by UK Islamic fundamentalist group Khatme Nabuwatt (KN).

Businesses owned by Ahmadis have been boycotted and face ruin while employers have been pressurised into sacking Ahmadi workers. The hate campaign even infected the General Election. after Muslims were urged not to vote for the Ahmadi Lib Dem candidate in Tooting.

The hate campaign is focused on this area because thousands of Ahmadis live nearby and worship at the Baitul Futuh mosque in Morden, which is not just the the biggest Ahmadiyya Mosque in Britain, but is believed to be the biggest mosque of any type in Western Europe.

Fears among the Ahmadi community have escalated since May when 86 Pakistani Ahmadis, including 58-year- old Southfields businessman Muhammad Ashraf Bilal, were killed while praying in Lahore by a Pakistani terror group.

Mr Bilal, who worshipped at the mosque in Morden was gunned down by seven Punjabi Taliban militants.

There is no suggestion KN has any links to action outside the UK.

Ahmadiyya Muslims differ from mainstream Islam by believing the second coming of the Messiah has already happened and is embodied by their founder, Mirza Ghulam Ahmad.

Sunni Muslim fundamentalist group KN denounces Ahmadis as “heretics” and its hard-line clerics have been invited into the Tooting Islamic Centre (TIC) by Imam Sulaiman Gani, the imam of both the Balham mosque and TIC.

Mr Gani said he invited the Khatme Nabuwwat clerics to the Tooting Islamic Centre to combat what he described as a misleading propaganda drive by the Ahmadiyya community ~ which ran advert- son London busses – and to show worshippers they were not Muslim.

He said: “The Ahmadi are based in south London. that is the reason why we have to maintain and keep up the campaign. I agree that maybe the campaign needs to be toned down. but Khatme Nabuwwat are the experts in this field. They have had the literature and the booklets for so many years. That is the reason why I invited them. They explained it very nicely and simple."

KN were contacted about the serious allegations but did not comment.

Lord Avebury the 81-year- old peer who has visited Pakistan four times. said the views were being imported from Pakistan. 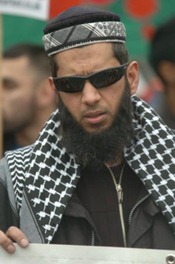 He said “I was made aware of it during the general election when I was in Tooting and there is one particular mosque [TIC] where they seem to congregate. But I have been shown evidence that it is not just Tooting. It is all over south London.

"Police need to get this evidence and they need to bring prosecutions to show people we are not going to tolerate that kind of behaviour in this country This is how the Holocaust started, with people boycotting businesses and putting inflammatory leaflets up in windows."

A spokesman for the Ahmadiyya Muslim community said: "We are shocked by the virulent hatred a tiny minority of extremists are spreading towards us, and in essence towards anyone who does not subscribe to their views." Ahmadi community leaders were due to meet police and Tooting MP Sadiq Khan on Tuesday to discuss the problems.