Centenary Milestone for one of Britain’s Oldest Muslim Communities

The Ahmadiyya Muslim Community – whose ethos is Love for All Hatred for None – marks a historic milestone tomorrow 25thJuly 2013, its centenary in Britain.

At more than 100 of its centres set up throughout Britain, thousands will gather at the crack of the dawn to offer special prayers, followed in the evening by a collective breaking of the Ramadan fast at the sunset. It would be a day full of thanksgiving- but also a day for renewing a long-standing commitment to Britain and its prosperity.

Maulana Chaudhry Fateh Muhammad Sayal was the founding emissary of the UK branch of the community who landed at the Liverpool Docks on 25th July 1913, entrusted with the task of establishing Ahmadiyya Muslim Community in Britain.

In February 1921, he was able to purchase for £2,223 a plot of land for the construction of a mosque in London – that was to becomeLondon’s first mosque – , and moved into the house adjacent to this land on 63 Melrose Road, Southfields. In a ceremony attended by the press, Reuters reported:

“A picturesque ceremony took place yesterday when Indians in brilliant turbans and Chief Oluwa of Lagos in silk robes opened the new Islamic institution which is at present housed in a large residence at Putney, pending the erection of a mosque. Some 50 English converts were present at the ceremony.

“Maulawi F. M. Sayal, one of the speakers, said that the Ahmadiyya Islamic Movement was a great hope of peaceful understanding between India and England..”

Ahmadi Muslims have condemned violent Jihad ever since the community was founded in India in 1889 by Hadhrat Mirza Ghulam Ahmad, and it stands firmly against firebrand clerics and those who incite hatred and violence.

Their 100 years of contributions in the UK includes hosting thousands of interfaith and peace events throughout the UK, reaching out across the UK by promoting messages of peace on hundreds of buses around the country, raising millions of pounds for charities including tens of thousands of pounds for the annual Poppy Appeal, organised blood donation drives, planting tens of thousands of trees to protect the environment, initiating a feed the homeless programme that will reach 20,000 people during the centenary and a nationwide programme of spreading the peaceful message of Islam through a door-to-door leaflet campaign that has already reached four million homes.

Earlier this year the community hosted  National Peace Symposium that was attended by 900 delegates including Cabinet Ministers and Ambassadors and in June an historical centenary celebratory event was hosted in the House of Commons by Secretary of State Rt Hon Ed Davey MP together with the All Party Parliamentary Group for the Ahmadiyya Muslim Community where more than 40 parliamentarians including a large number of Cabinet Ministers including the Deputy Prime Minister and the Home Secretary were present and where the worldwide head of the Ahmadiyya Muslim community delivered the keynote address.

The Head of the Worldwide Ahmadiyya Muslim Community, Hadhrat Mirza Masroor Ahmad, the Khalifa of Islam based inLondon, said: 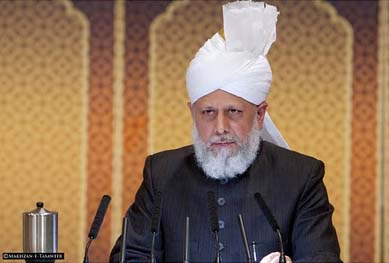 “Britain has provided a home for thousands of Ahmadi Muslims over the past century. Our duty as Muslims is to be grateful to God and to give thanks to Queen and country for allowing us to practice our faith freely.

“Islam teaches us to be loyal citizens and we believe it is our duty to serve the country, contribute to society and promote peace for all.

“When we say Islam means peace, we practice that very fact and demonstrate it with our actions.”

In 2012 the community also funded hundreds of buses on the occasion of Her Majesty the Queen’s Diamond Jubilee as part of firm commitment to loyalty to one’s country. Earlier this year the community raised nearly a quarter of a million pounds for British charities through its charity walks and in August the centenary celebrations will take centre stage in its Annual International convention (Jalsa Salana) that will attract 30,000 delegates from more than 80 countries.

“In this our centenary year we are making an extra effort to reach out and strengthen our links with the wider community. Events such as the terrible Woolwich murders, which have no place in Islam, remind us that we need to ensure that people have the chance to learn about the true peaceful message of Islam, so that there is greater understanding, unity and social harmony. The need for such initiatives has never been greater. We are proud of our heritage and our contribution to the UK.” 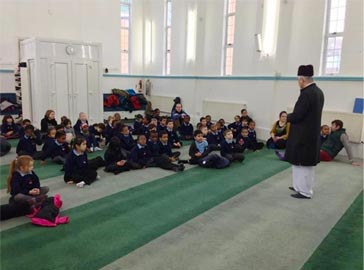 The community has already hosted many local community events to mark the centenary with local friends and communities, and more are planned throughout the centenary year as well as a major international Conference of World Religions as part of the community’s ongoing commitment to education and peace. The Prime Minister, Deputy Prime Minister and the Leader of the Labour Party have all sent messages of congratulations on this centenary. Rt Hon Ed Miliband MP said that, ‘You have always brought people of all faiths and backgrounds together, and may you continue to do so for another hundred years’, Rt Hon Nick Clegg MP said that ‘your community exhibits the very best of humanity’  and The Prime Minister Rt Hon David Cameron MP congratulated the community on its ‘remarkable centenary’ noting that ‘communities such as yours …show the world the best ofBritain’, adding that ‘Britain can be proud of you.