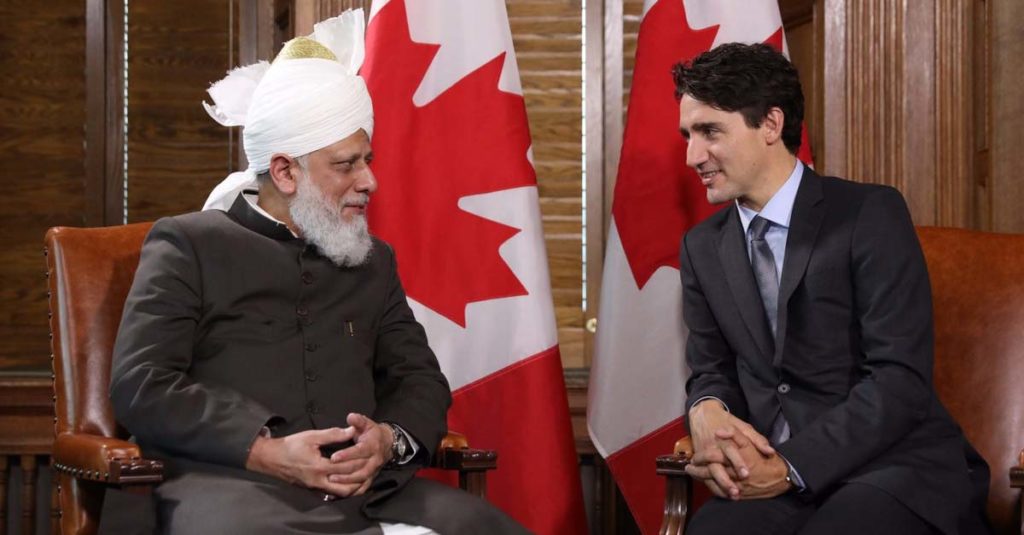 Canadian Twitter was buzzing Monday afternoon as the ‘Khalifa of Islam‘ arrived in Ottawa to meet Prime Minister Justin Trudeau. The hashtag #CaliphinCanada started trending across Canada as the Khalifa of tens of millions of Muslims made his way to Parliament Hill.

His Holiness Mirza Masroor Ahmad, who is the worldwide spiritual head of the Ahmadiyya Muslim Community was greeted by Members of Parliament upon his arrival at Houses of Parliament.

Prime Minister Trudeau welcomed the Caliph to Canada and thanked him for his continued efforts to promote peace worldwide. He said:

“Your Holiness, your friendship and leadership is very important to Canada and we appreciate the way the Ahmadiyya Muslim Community condemns all forms of extremism.”

The Caliph recalled his previous meeting with the Prime Minister in 2012 who at the time was not even the leader of the Liberal Party. His Holiness Mirza Masroor Ahmad said:

“When I first met you in 2012 I prayed for you and said that I believed that one day you will be Prime Minister.”

PM Trudeau later invited him to a roundtable meeting with Ministers and Members of Parliament where he congratulated the Canadian Ahmadiyya Muslim Community on its 50th anniversary. He later tweeted a picture with the Caliph saying “It was a pleasure to meet with the Caliph”

It was a pleasure to meet with the Caliph of the Ahmadiyya Muslim Community, Hazrat Mirza Masroor Ahmad, today in Ottawa. #CaliphInCanada pic.twitter.com/errTelGbmb

The Caliph also took great interest in watching the parliamentary proceedings from the gallery, where he was a given a round of applause and a standing ovation as his presence was announced by the House Speaker.

As the afternoon hit, the Caliph and his entourage took a prayer break inside the Houses of Parliament, where the Islamic call to prayer was recited before the Caliph lead them in prayer.

In the evening a private reception was held in the Parliament in honor of the Caliph, which was attended by over 90 Members of Parliament, 15 Senators, and several Ambassadors. USCIRF (United States Commission on International Religious Freedom) Vice Chair James Zogby and Policy Analyst, Saher Chaudhry traveled from Washington D.C. to attend the event.

The Caliph, His Holiness Mirza Masroor Ahmad who has a following of tens of millions worldwide is on a six-week Canadian tour. The meeting with PM Trudeau was part of a formal visit to meet Cabinet Ministers, Senators and Members of Parliament to showcase the “peaceful nature and beauty of the Islamic faith”.

After the meeting, many MP’s expressed their joy at meeting the Caliph on social media.