Ahmadi leader brings message of peace at speech in Mississauga

Nearly a month after Canadian cardiologist and member of Islam’s Ahmadi sect, Mehdi Ali Qamar was shot to death in Pakistan, thousands of members of the controversial Muslim minority gathered in Mississauga on Saturday to pledge their allegiance to a peaceful jihad.

“What is our response? Are we going to block roads? Are we going to start burning banks, or burning restaurants, or looting shops? That is not our reaction. Our reaction is if one doctor is slaughtered, if one doctor is murdered, our community will produce hundreds of other doctors,” keynote speaker Maulana Mubarak Ahmad Nazir said at the 38th annual Jalsa Salana hosted by Ahmadiyya Muslim Jama’at (AMJ) Canada.

Nazir, a leader in the country’s Ahmadi community, was a beacon of light as he stepped to the podium, his white suit a stark contrast to the heavy black curtains cornering off the main room.

He addressed two crowds simultaneously at the three-day convention, held at the International Centre in Mississauga. He spoke directly to the convention’s male attendees from a stage set up in front of thousands of chairs and sheets that lay directly on the concrete floor, while the female convention-goers watched from a video feed in a separate women’s auxiliary.

A rainbow of Hijabs and the pitter-patter of little feet livened up the women’s auxiliary, but the message was the same: love for all, hatred for none.

Women made up the largest group at the convention, which hosted dozens of dignitaries Saturday including Liberal Party leader Justin Trudeau, Minister of Citizenship and Immigration Chris Alexander and Mississauga Mayor Hazel McCallion, who was honoured with an award for public service.

The Ahmadi sect is the fastest growing in Islam, according to AMJ Canada. They estimate about 50,000 practicing Ahmadi Muslims live in the GTA, with about 10 million followers worldwide. 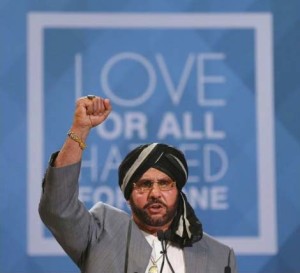 This contemporary mandate, know as a the “jihad of the pen” because it promotes intellectual messaging over violence and categorically rejects terrorism in any form, is at odds with the ideas of other Islamic sects. In 1974, the sect suffered state-sponsored persecution when Pakistan’s then-prime minister Zulfikar Ali Bhutto passed a constitutional amendment pronouncing Ahmadi non-Muslim.

Amidst the unrest that continues today between sects, keynote speaker Nazir asked his fellow Ahmadi Muslims to continue delivering a message of peace.