Woman and two children burned to death by anti-Ahmadiyya mob in Gujranwala, Pakistan

A woman and two children were burnt to death when local extremists set five houses belonging to members of Ahmadiyya community on fire.

On Sunday night an angry mob lead by son of a local Imam attacked Ahmadiyya community in Gujranawala a town 140 miles southeast of the capital, Islamabad, over alleged blasphemy, killing four people. Four other Ahmadis were critically injured and taken to the District Headquarter hospital.

According to People Colony Circle’s Deputy Superintendent of Police the mob gathered to protest ‘blasphemous material’ allegedly posted by an Ahmadi youth on the social networking website Facebook.

Later, the mob turned violent and started looting & torching the Ahmadiyya community’s houses and attempted to raid another. Bashira Bibi, 55, and two minors including eight-month-old Hira, and her seven-year-old sister Kainat, died due to the fire. The 4th victim was an unborn baby, the mother suffered a miscarriage due to the injuries caused by the fire. Seven others including two women were also injured. Fire trucks responding to the fire were turned back by the mob.

According to eyewitness reports Police was not reacting as it should have been and that MPA Khalid Imran Butt & CPO Waqas Nazeer were also present when the houses were being burnt down by the mob.

“The attackers were looting and plundering, taking away fans and whatever valuables they could get hold of and dragging furniture into the road and setting fire to it… Some were continuously firing into the air,” he said. “A lot of policemen arrived but they stayed on the sidelines and didn’t intervene,” he said.

‘Police were there but just watching the burning. They didn’t do anything to stop the mob,’ he said. ‘First they looted their homes and shops and then they burnt the homes.’

It was the worst attack on the community since simultaneous attacks on Ahmadi places of worship killed 86 Ahmadis four years ago.

Mr Saleem-ud-din also posted a tweet stating that he personally contacted  federal minister Khurram Dastgir-Khan MNA for Gujranwala, local police officals and the Inspector-General of Punjab Police but no one bothered to listen. 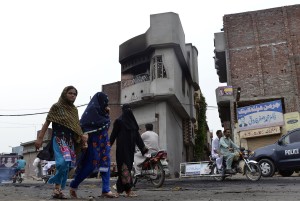 In response to the Gujranwala attack, the World Head of the Ahmadiyya Muslim Community, His Holiness, Hazrat Mirza Masroor Ahmad said:

This attack was an act of the most extreme cruelty and brutality, whereby innocent people who were sitting peacefully in their own homes were attacked and left for dead.

This attack took place as the local police stood by and watched and took no action. It is yet another example of how the authorities in Pakistan are aiding the persecution of Ahmadi Muslims.

Let it be clear that we Ahmadi Muslims will never undertake any worldly protest and nor will we ever take to the streets. Our response to all of the sustained persecution that we face is, and will always remain, to bow down before Allah the Almighty and to seek His Help and Mercy.

To kill and to violently oppose is not an act of Islam but it is the act of those people who do not believe in God and do not even possess the most basic human values or decency.

Under Pakistani law, Ahmadis are banned from using Muslim greetings, saying Muslim prayers or referring to his place of worship as a mosque.

Accusations of blasphemy are rocketing in Pakistan, from one in 2011 to at least 68 last year, according to the Human Rights Commission of Pakistan. About 100 people have been accused of blasphemy this year.

Human rights workers say the accusations are increasingly used to settle personal vendettas or to grab the property of the accused.
Following the violence all the Ahmadi families have fled the area.