US Mosque hosts celebration in honor of Pakistani killer 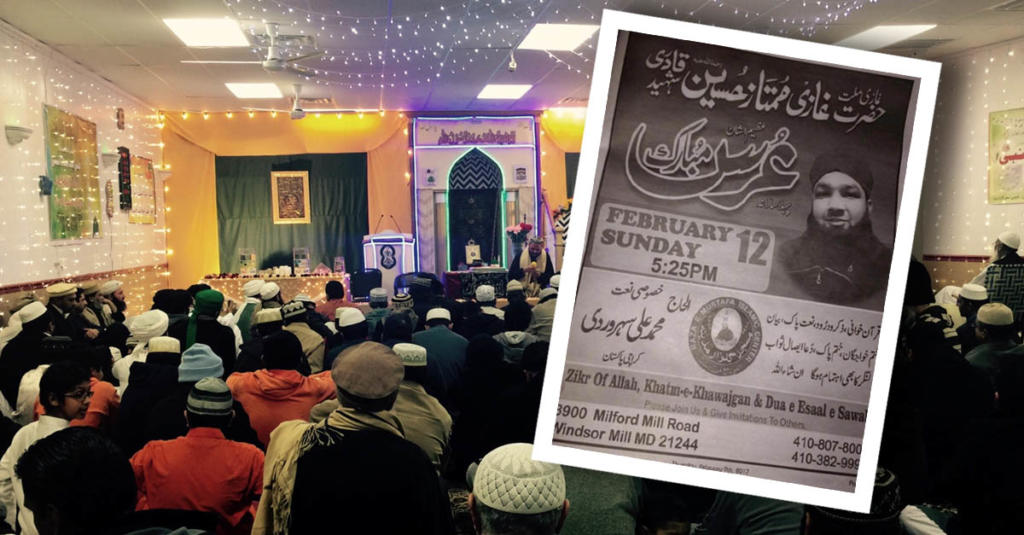 A U.S. Mosque on Sunday celebrated the death anniversary of a Pakistani man who shot and killed a sitting Governor for criticizing the country’s Blasphemy Laws.

Mumtaz Qadri, who was the Governor’s bodyguard, assassinated liberal Pakistani politician and Governor of Punjab province Salman Taseer in 2011 for speaking out against Pakistan’s controversial Blasphemy laws and expressing solidarity with a Christian woman who had been accused of blasphemy. After Qadri was charged with murder by an anti-terrorism court and hanged in 2016, more than 100,000 people came out to attend his funeral. 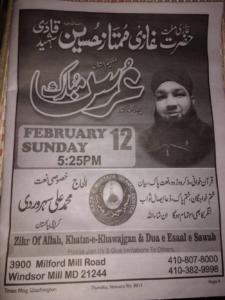 The Gulzar E Madina Mosque in Pikesville, Maryland hosted an “Urs” in honor of the infamous killer on February 12th. Urs is a traditional commemoration usually given to Saints and Holy personages. The Mosque also advertised the event in the February 9th edition of Urdu Times, America’s most widely distributed Urdu language newspaper.

Pakistan-based Ali Soharwardi has been on a U.S tour for the past few weeks and performed at several events in New York and New Jersey before making his way to Maryland.

Speaking at the event, an unidentified speaker said:

Speaking at the event New Jersey-based Islamic scholar Syed Saad Ali asked the attendees why they did not take any action after the arrest of Qadri, Ali said:

Warrior Mumtaz Qadri kissed the noose in love for Prophet Muhammad When Qadri was in jail for 5 years what did we do? what effort did we make (for his release), Why did we not go where he was being held? Qadri did everything for us, and for the love of Islam and we could not even stand by himPeople say Islam teaches peace…..I say Islam teaches us Ghairat (Honor) Who will now stand up?

Our warrior Tanveer who is sitting in a jail in Scotland, I don’t know if someone knows or not, when that Mirzai (Ahmadi) spoke his “sacrilegious rubbish” he went there and stabbed him 27 times and the police arrested him and right now he is in a jail in Scotland. So if we just take a step forward, angels will automatically come for our help. But what Mumtaz Qadri has done is something amazing, he has surpassed all these warriors

Mumtaz Qadri was not a terrorist and whoever says “We are with you O Prophet” cannot be a terrorist.

He went on to condemn American Muslim organizations for not taking action against Blasphemers, Hussain said

When the blasphemous film was released in the U.S, everyone was sleeping including CAIR, ISNA, ICNA and others, and now when the ban has come into effect, they all have risen up, because they are not letting Muslims come into this (so called) heaven

The speakers also collected donations which they claimed would be used to help Syrian refugees get to the U.S.