Begum Nahid Iskandar Mirza died in London on January 23rd, 2019, just two weeks before her 100th birthday. Born Nahid Amir Teymour, she was the first First Lady in the history of Pakistan.

When the country became the Islamic Republic and established its own constitution in 1956 — having been a British dominion until then — its National Assembly unanimously elected Iskander Mirza as Pakistan’s first President. It is then that his wife Nahid Amir Teymour became the First Lady.

The Begum was a descendant of Teymour Lang. Her father, head of the Amir Teymour tribe, was a wealthy landlord from Khorasan who was elected as a parliamentary deputy no fewer than 13 times in Tehran. He served in Prime Minister Mohammad Mossadegh’s cabinets in the early 1950s, first as Labor Minister and then as Minister of Interior. The Begum’s mother had three lines of descent from Fath-Ali Shah Qadjar. Her brother was one of Iran’s senior diplomats, serving as ambassador to New Delhi and Moscow before becoming the Shah’s penultimate ambassador to London.

At a young age, the Begum married Colonel Mehdi Afkhami. His father and uncle were both generals, and he would soon be one himself. In 1951, he was posted as Military Attaché to Karachi, then the capital of Pakistan. His wife would have preferred a divorce. Yet her father insisted that she go with him.

Shortly after they reached Karachi, at a reception at the Russian Embassy, she met Iskander Mirza for the first time. He made his way through the guests, stood before her and said simply: “You shall be my wife.” He was a portly soldier of 52, and she was a woman more than 20 years younger. He had a wife and six children. She was married with a daughter.

What made their marriage even more unlikely was that he was the Secretary of Defense of the host country, and she was the wife of the military attaché of a friendly neighboring state. The only thing they had in common was that they were each trapped in an unhappy marriage.

Her surprise suitor also happened to be of royal lineage. Iskandar Mirza was a distant descendant of the Nawab Nazims of Bengal, Bihar, and Orissa. By the time of his impetuous proposition to the wife of the Iranian military attaché in December 1951, he had been Secretary of Defense for four turbulent years and, though relatively young, was eager to retire.

In 1952, after only a year in Karachi, Colonel Afkhami was recalled to Teheran. Iskander Mirza told Nahid that he would resign and have himself posted as Ambassador to Iran. Still married at the time, she begged him to do no such thing and flew to London where her daughter was about to enter boarding school.

He finally overcame her doubts with a stream of passionate love letters which always ended with the words “Yours ever in life and in death.” Once she had obtained her divorce in December 1952, he started making plans for them to marry in Europe that summer, a protracted procedure that culminated in their wedding in September.

Iskander Mirza then returned to Pakistan, hoping to relinquish his post as Secretary of Defense and return to London to lead a life of conjugal bliss with his new wife. It was not to be. In January 1954, he was appointed Governor of East Pakistan (the Bangladesh of today) in the hope that as a Bengali he would pacify the restive population there. He did so with vigor, and started thinking of going back to Europe for a honeymoon.

When Pakistan became the Islamic Republic in 1956, the National Assembly unanimously elected Iskandar Mirza as the first President. With his First Lady always at his side, he undertook state visits to Iran, Turkey, Spain, and Portugal and hosted the Soviet and Chinese leaders.
The State visit of the Shah of Iran with Empress Soraya to Pakistan

Resplendent in her saris, the Begum brought color and panache to state occasions. Pakistan’s old guard did not take kindly to having an Iranian First Lady. Yet with her natural warmth, she won many of them over, in particular, the revered widow of Liaquat Khan, who was always at hand to give her moral support.

For the Begum, it was a difficult path to tread and she bridged the gap through the charitable works she undertook. She set up the Blind Educational Trust and the Adult Blind Center and sponsored the first major orphanage, the “Kashane.”

In October 1958 — after only 18 months in office but with Ayub Khan’s full support — Iskander Mirza suspended the constitution and assembly, which had made him president, and declared martial law. There were growing differences with Ayub Khan, his mentor, as to how long and how draconian military rule should be. The President made him Prime Minister, but far from pacifying him, that made Ayub Khan more ruthless.

On his orders at midnight on October 28th, an admiral and four generals burst into the President’s bedroom. It is commonly said that Iskander Mirza and his wife were taken straight to the airport and flown to London that same night. In reality, they were taken to Quetta, the distant and isolated capital of Baluchistan. There, they were held for four days, their lives imperiled, with no one to tell them what would happen next. Only after intense pressure from Western governments were they brought back to Karachi and put on a flight to London.

And so began their years of exile in London. After the initial shock of their displacement, they settled down to the sort of conjugal domesticity that Iskander Mirza had pined for 10 years earlier. They had a constant stream of Pakistani and Iranian guests, either for dinner or to play bridge. They had no great fortune, yet they lived a comfortable life in South Kensington, happy in each other’s company and in no way traumatized by what they had lost or let slip through their fingers. 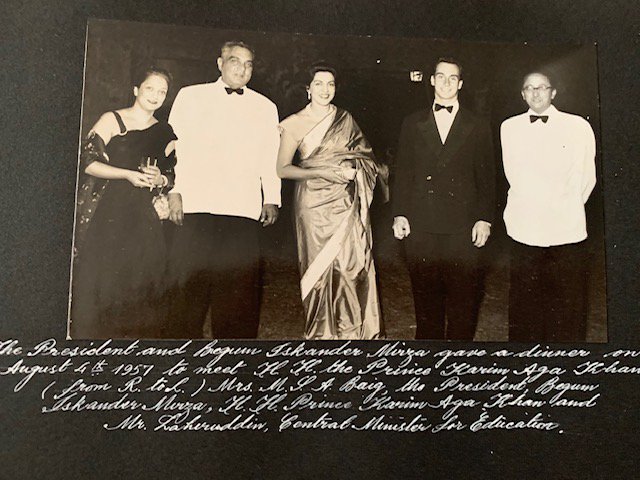 Ardeshir Zahedi, Iran’s foremost diplomat and a close friend of the Begum, offered his family vault, and his father-in-law, the Shah, decreed that Iskander Mirza, who had been spurned in his own country, be given a state funeral in Iran.  So Shah Mohammad Reza Pahlavi sent his personal plane to London to bring President Mirza’s body to Tehran, where he was given a state funeral and laid to rest there with full military honors.. Hundreds of Iranians, including Prime Minister Abbas Hoveyda, and Pakistani expatriates in Iran bade farewell and offered their prayers.

The 50 years of widowhood that followed for the Begum – half of her life – were far from empty or sterile. She rediscovered some of her earlier passions, particularly classical Persian poetry. She could recite most of Hafez by heart, as well as her own poems, dedicated to members of her family. Hardly a day went by when she did not have guests to lunch or dinner, and in her tiny kitchen, she conjured the most wonderful Persian and Asian dishes.

In the seventies and eighties, she became a close friend of Ava Gardner whom she had first met in 1956 when she was in Pakistan filming Bhowani Junction with Stewart Granger. By coincidence, they found themselves neighbors in Ennismore Gardens some 20 years later.

The Begum always carried two nations in her heart – Iran, and Pakistan. Perhaps the most significant event of her final decades was her one and only return to Pakistan in 1998. Iskandar Mirza had given Zulfiqar Ali Bhutto his first ministerial post and the two families had remained close. Bhutto’s wife Nusrat also happened to be Iranian, though she was not the Begum’s cousin or relative as Pakistani papers have been claiming. They became close friends and this friendship carried into the next generation.

When Benazir Bhutto became Prime Minister she invited the Begum to visit Pakistan, where she was heartened by the warm welcome she received in Karachi, Lahore, and Peshawar.

At the time of the coup 40 years earlier, Ayub Khan had destroyed all of Iskander Mirza’s archives. For the Begum, the greatest loss was his love letters. Sometime after his death, she was told that there had been recovered and would be given back to her. She was overcome with joy — only to find herself with a heap of empty envelopes from which the letters had been extracted.

For the Begum, a soaring whirlwind romance ended in 10 years of mild and pleasant exile, followed by 50 years of widowhood – half a lifetime spent cherishing the memory of the man whose photographs she kept in every corner of her apartment, loyal to him “in life and in death.” 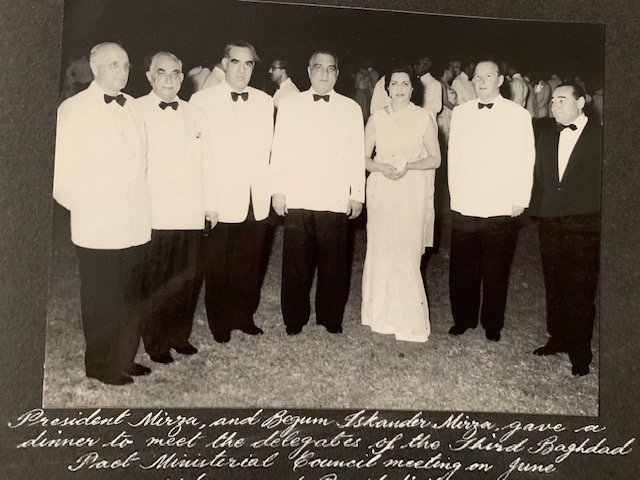