On 28th May 2010 two mosques belonging to the Ahmadiyya Muslim Jamaat in Lahore were attacked by terrorists. The mosques were the Baitul Nur Mosque in Model Town and the Darul Zikr Mosque in Ghari Shahu.

In a meticulously planned attack, sectarian terrorists carried out a slaughter of Ahmadi worshippers who had gathered for Friday prayers.Absence of any effective police presence enabled them to succeed in their gory operation, as planned. 94 worshippers died and 125 were injured.The dead include Judge (R) Munir Ahmad Sheikh, the Amir of the Lahore Ahmadiyya community, Major General (R) Nasir Ahmad, president of the Model Town chapter, Mr Mahmud Shad, a missionary, Mr Ejaz Nasrulla, a nephew of Late Sir Muhammad Zafrullah Khan, former President of the International Court of Justice at Den Haag, Mr Muhammad Aslam Bharwana, a senior railway official and a number of community officials.

The attacks were timed to be simultaneous. Two or three attackers targeted the Model Town mosque while a larger contingent attacked the bigger Garhi Shahu mosque. The terrorists killed or injured the few community guards and stormed the main assembly halls. When inside, the attackers used hand grenades and sprayed bullets indiscriminately on the worshippers. At Garhi Shahu they availed plenty of time to expend their ammunition. Many more casualties occurred when they blew themselves up.

The police arrived in due course and apparently took their time to ensure a safe and smooth intervention. As a result, little timely rescue and evacuation efforts were made which resulted in death of many injured due to bleeding. According to media reports two police officers were injured slightly at the initial stage at the Garhi Shahu site.

Two terrorists were apprehended by Ahmadi youth in Model Town mosque, stopping them from blowing themselves up. This contained the damage. They were handed over to the police.

According to press reports, three heads of suicide bombers were recovered from the Garhi Shahu mosque. 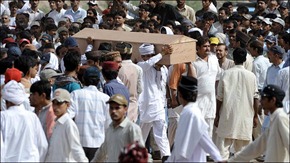 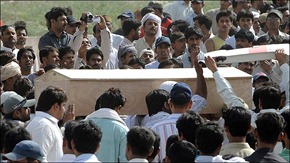 Most of the dead, when alive, had opted to be buried in Rabwah, therefore soon after the attack, over 90 graves were dug up in the town’s graveyard. The dead were buried after their funeral prayers in groups. The program of a joint big burial ceremony was abandoned for security concerns. 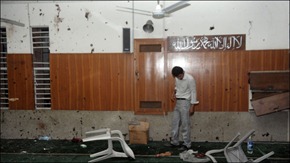 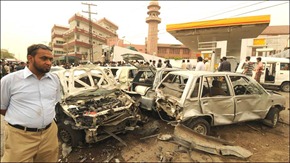 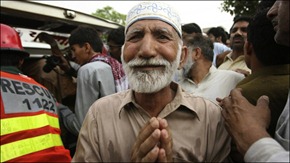 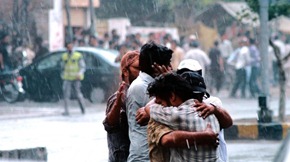 Just days after the Lahore attacks another Ahmadi, Mr Nehmatullah of District Narowal, Pakistan was today martyred due to being an Ahmadi.It appears that this pre-meditated murder was directly inspired by the Lahore attacks.He was attacked with a knife and died soon after.

The village in which the deceased lived is populated with three Ahmadi families. After hearing recently in a Friday sermon that Ahmadis were ‘Wajibul Qatl’ the assailant was allegedly openly preaching that he would murder Ahmadis. The term ‘Wajibul Qatl’ is being used increasingly in Pakistan in regard to Ahmadis and translates as deserving to be killed.

Following the Lahore attacks on Friday the assailant also allegedly said openly that he would personally make sure that no Ahmadi was left alive in his village. 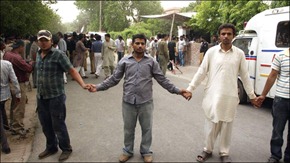 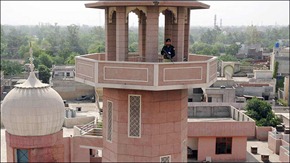 This incident shows again that Ahmadis are facing a time of great uncertainty and danger in Pakistan. The International Community and Media are all urged to take action to help safeguard and protect the lives of Ahmadi Muslims

The community, however, did not take to the street, take out processions or stage a protest in Rabwah. It is not the practice with Ahmadis. Instead, they have turned to God and continue to pray for themselves and the countrymen in general. They were guided by a statement from their supreme leader, the Khalifa tul Masih V: “The Ahmadiyya Muslim Jamaat is a peace loving true Muslim Jamat. Thus there will be no improper reaction from any Ahmadi. Our salvation lies in our supplication to God Almighty and we believe that He has, and always will, help us”.

As for the terrorists, Tehrik Taliban Punjab has claimed the responsibility. It is confirmed by those who survived the massacre in Garhi Shahu that the terrorists faced no resistance from the police during their attack, and had sufficient time to even examine the dead bodies in the main hall and kill those who were still alive. They shouted slogan of Khatme Nabuwat Zinda bad, (Long live End of Prophethood). According to eye witnesses, four of them managed to escape after the carnage.

Almost a month ago the Governor of Punjab made a public statement that the province is on knife-edge as extremists take hold, and he accused politicians of backing banned groups as minorities suffer violence and intimidation. The Federal Interior Minister also said that his ministry had warned the Punjab government of possible terrorist attacks.

Five days thereafter, the people of Rabwah caught a man red-handed who was carrying a great deal of arms, ammunition and hand grenades in the town. They placed him in the custody of the police.

Pakistan’s High Commissioner to the UK, Mr Wajid Shamsul Hasan visited His Holiness, Hadhrat Mirza Masroor Ahmad at the Fazl Mosque in London on 2nd June 2010 to offer his condolences for the terrorist attacks that took place at two Ahmadi Mosques in Lahore on May 28.

During the forty minute meeting the prevailing political situation in Pakistan was discussed. His Holiness commented that all the attacks taking place in Pakistan were a direct result of mixing religion with politics. He expressed a hope that some leaders in Pakistan would stand up to the fanatical extremists who were the cause of so much pain and suffering in the country.