Government Post Graduate Taleem-Ul-Islam college on Friday concluded its three day sports Gala. This was the 75th anniversary of the annual sports event which has been held by the college since 1944. 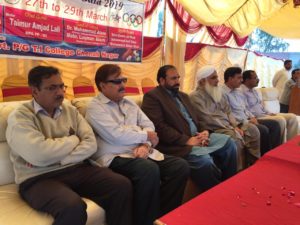 Over the course of three days the college hosted 25 sports competitions. College Principal, Professor Zia-Ul-Husnain Shah start off the games with a players march. The event featured Professor Roshan Zameer, Assistant Director Sports BISE Faisalabad as its guest of honor.

The event highlights 100 meter race between the Professors in which Professor Sami-Ullah managed to secure first place by vivid margin ; whereas Professor Asif Raza secured the 1st place in the leg race between Assistant/Associate Professors.

This year’s event was historic in a sense that it was the first time female students of the college also took part in the games. The college stated that “special arrangements were made for their safety and sanctity”.

Speaking at the event Principal Zia-Ul-Husnain Shah thanked the college staff and students for getting the event off the ground. He also expressed his gratitude towards members of the working committee for igniting a passionate furor for the event.