I had a very nice life in Syria. I was an elementary school teacher. I got along with all of my neighbours, whether or not they were the same religion as me. When the war began I lost my whole life—memories, friends and family. I never knew which home would be bombed next. I wasn’t able to help anyone, even my neighbours, because I could be killed if I tried to help them. Each day I would say goodbye to my husband as he left for work not knowing if he would come back home. 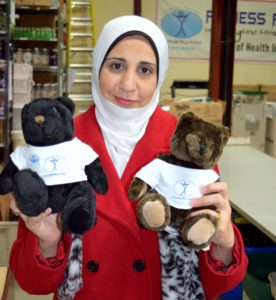 When I came to Canada in February 2016, I immediately felt welcomed—people helped me get a health card and find a doctor. My first few months in Canada were challenging. As an Arab, I come from a large family. It was extremely difficult not being with the rest of my family. I could call or Skype them, but the Internet in Syria is very expensive. I felt alone. However, I made many friends here and found a job quickly.

Shortly after coming to Canada I started volunteering at Humanity First in Toronto, the organization that sponsored me and my husband. I often interpret for Arabic-speaking families and speak at orientation sessions. Also, in March 2016, just one month after I landed, I volunteered as an interpreter for Syrian refugees. I am very happy when I can help refugees, especially Syrian refugees, because I understand the obstacles they had back home. I know their struggle. They feel less afraid when they speak to me. Like me, they have come to Canada to start forgetting the pain from Syria, and build a new life here. What do refugees want? Simply to live in a safe country like Canada.

In Canada, everyone is liked because they are humans, not because of their religious beliefs. All religions are accepted here. Canada opens the doors for opportunities”

— Suha, a refugee from Syria, now works as an Arabic teacher at Aisha Academy in Maple, Ontario.