Silence of the lambs: waiting for justice in the Land of the Pure

They only came to pray. They paid with their lives. Friday Prayers on 28th May 2010 for the Ahmadis of Lahore will always be remembered in blood and tears. It was supposed to be a day like any other. The Friday congregation of the community gathered as usual to offer their devotion. Immaculately dressed, heads bowed before God, serenity in the air. Then terror struck. Armed men with suicide vests and grenades descended like demons on two of the major Ahmadiyya mosques in the city, proceeding to systematically target and kill those present at a leisurely pace over the next few hours. CCTV footage showed the policemen installed for security fleeing the scene. Punjab Police contingents arrived and stood by.

As the hellish afternoon darkened into twilight, the prayer rooms of the mosque at Model town and Garhi Shahu’s Dar-ul-Zikr echoed with the silence of the dead and the moans of the dying. 86 worshippers had been killed, more than 100 injured. Out of the 7 terrorists that had targeted the mosques, 2 were overpowered by some of the younger worshippers and handed over to the police. An attempt to capture another ended in more death as he activated his suicide jacket. Those arrested have not yet even seen the inside of a courtroom.

Two years later, life goes on in Lahore, but those who survived that fateful day can’t forget the ones that didn’t. They still remember their loss. They still wait for justice.

28th May 2012 marked Memorial Day for the Ahmadiyya community in Pakistan. The massacre of 2010 was one of the top trending topics in Pakistan on Twitter that day. But other than a few articles and a filtered TV show or two, the mainstream media of Pakistan seemed curiously silent on what has been deemed the “worst massacre in Lahore since the Partition of India” by Bradley Cooper, the Asia Director of Human Rights Watch. It reminded me of the day of the terrible incident when I was anchoring and witnessing the event live from the studios of a major Pakistani news channel. My most vivid memory is the voice of caution in the midst of the calamity by one of the news producers. As I was trying to translate the terrible tragedy unfolding before me into responsible reporting, trying to put a number on the rapidly increasing casualties, I was repeatedly told “Do not refer to the attacked structures as mosques, refer to them as ‘places of worship'”. From mentioning the Ahmedis under attack, our terminology was checked and trimmed until we were only referring to them as a “minority community of Pakistan”. Reporters covering the incident from the field under extremely dangerous circumstances were told the same.

“We were operating with a knife on our throats that day,” one of the panel producers confessed while recollecting 28th May 2010. “There was constant monitoring on what was being shown and communicated on the airwaves.” She felt that as the day continued, the mainstream TV channels “went on the back foot.”

The follow-up was sporadic to non-existent. Not many local news bulletins contained subsequent stories about the tribulations of the survivors or raised many questions as days passed into months and no headway seemed visible in police investigations. A group called the ‘Punjabi Taliban’ with alleged links to the TTP had taken responsibility for the attacks, 2 terrorists had been arrested red-handed and 6 more arrests were made in July, with vague references to links with the 28th May attacks. There were no further reports on prosecution and trial of any of the alleged culprits. Declan Walsh, the Guardian correspondent at the time, commented, “Usually vocal TV commentators condemned the violence but few dared voice support for the Ahmadiyya community itself.”

Saleem-ud-Din, the spokesperson for the community, agrees with this observation. “Our sentiments and perspective were not represented by the media. We held a press conference two days after the attacks. All the major TV channels covered it. They asked questions. It was not broadcast on any channel except one which showed a 20 second clip.”

The media is but a mirror of the prejudices and anxieties that have enveloped this society, especially when it comes the persecution and marginalization of the Ahmadiyya community, particularly since General Zia ul Haq’s Ordinance 20 of 1984. Bias and discrimination against the Ahmadis has permeated across socioeconomic and political strata.

“I found out about the attacks through a text message. It said: ‘Hey, your mosque has been attacked. Ha Ha Ha!'” says F, a quiet, thoughtful student at a progressive college. The sender was supposed to be a close friend. Reeling from the news, he stepped into the common room and found several of his peers watching the drama unfold on TV like a “cricket match”. People were either laughing or indifferent. As he backtracked from the room propelled by despair, a classmate’s words rang in his ears like a gunshot. “They deserve to die.”

Sometimes terrorism is not physical. Sometimes it targets the soul.

F lost 6 members of his family that day. He would have been number 7 but a delayed class probably saved his life. But something else was lost. Those few minutes in the common room stole from him the last few shreds of hope. He does not believe things will ever change for the better. Looking down into his coffee mug, as if trying to see his future in the depths, he says, “We are living like ghosts in our own country.” He does not intend to stay. Commenting on the culture of silence that surrounds this alienation, his parting words are: “My father told me since I was a child, even if you are in the right about something, claim to be wrong. Because no one will ever hear you.”

But there are others in the Ahmediyya community who refuse to be silenced. They are engaged in a battle to be heard, a battle whose weapons are pen and paper. After the 28th May attacks, the community leaders urged the youth to channel their anger into letters demanding justice for the bloodshed. Thousands of these letters were written and sent to the Punjab Chief Minister, the Chief Justice, to anyone who would read them. Through stories of loss and pain and rejection, the Ahmadis shared their grief with the world. They were greeted with silence in their own country. “We don’t want to come out on the roads and vandalize the streets,” insists Saleem-ud-Din, “we believe in peaceful protest.” 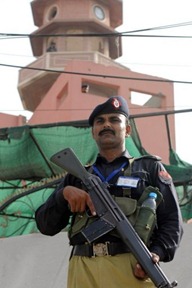 Survivors of terrorist attacks are often left with the burden of remembering what befell them, for the sake of those who did not live, in the hope that they will not be forgotten in a desensitized society. 24-year-old M tries to carry out this task bravely, but his eyes spill with tears and his voice wavers as he recalls the experience of making it out alive from the blood-spattered mosque in Garhi Shahu. “The gunshots came first,” he recalls, “than the grenades. Then we knew we were not going to get out of there alive.” As he ran among the other panicked worshippers who were being shot at through broken windows like trapped animals, he saw the Murabbi, the cleric, being hit by a grenade. He remembers smoke and darkness as the overhead lights shattered one by one. He saw people trying to hide underneath bodies, but the grenades always seemed to know where to land. He managed to get out of the main hall and into the courtyard. The khuddaam, or private security personnel of the community, were trying to usher people to safety. M found himself hiding, wedged into a side staircase with almost a hundred others. “We were wedged in so tightly, we could not even move. The seriously injured were calling out for water and we could not give it to them.”

Many of the trapped were trying to call loved ones at home. 17-year-old Waleed, a bright young medical student and an only son made one such call to his mother. “Ammi, please pray for us,” he whispered calmly. It was the last time she heard his voice. He was the youngest to die in the massacre.

When the tumult had ended, the bodies were taken away, community leader Mirza Ghulam Ahmed led his people in prayer, in the same blood-stained hall of the prayer room that had just been violated. Now he is stoically apprising me of the rescue efforts, of identifying overflowing bodies in morgues, but when asked how he felt at that moment, his voice collapses into grief.

“I was leading prayers for my congregation in a place where hours before, 86 of our own had been murdered in cold blood. How do you think I felt?”

Two of the apprehended terrorists, Asmatullah and Abdullah, were charged under the Anti-Terrorism Act and remain in custody, but there has been no progress in the case and proceedings have been repeatedly adjourned.

“We handed them over to the police wearing suicide vests, carrying guns, from the scene of the crime, littered with bodies, and they say they want witnesses,” sighs Saleem-ud-Din. “We cannot endanger more lives by exposing them this way.”

Bradley Cooper of Human Rights Watch deemed it obscene that two years after the massacre, the government had still not brought the accused to trial. “By pandering to extremists who foment violence against the Ahmadis, the government emboldens militants who target the beleaguered community, and reinforces fear and insecurity for all religious minorities.”

According to HRW, since the bloodshed of 28th May 2010, there has been an intensification in the hate campaign against Ahmadis in Pakistan.

In June 2011, pamphlets were distributed in Faisalabad deeming Ahmadis liable to be killed, boldly printing the names and addresses of 50 prominent Ahmadis. It was signed by the student wing of the Khatam-e-Nabbuwat Federation. The organization even listed its website and phone numbers. The government did nothing to curb the hate campaign. According to Dawn, later that year 6 Ahmadis were shot dead, including one whose name had appeared on the list.

State-directed discrimination and apathy has poured down into every crack and crevice of society, even the well-educated “liberal” enclaves. This bodes disturbing times for Pakistan.