All-Pakistan Students Khatm-e-Nubuwat Federation are handing out Pamphlets labelling members of the Ahmadiyya community “Wajibul Qatl” (‘liable to be murdered’), and inciting people to attack followers of the faith, are being openly and widely distributed in Punjab’s hub Faisalabad, Not only that the weekly Khatm-e-Nabuwat magazine website states that anyone who commits the “crime” of leaving “Islam” should be killed.

But the shocking fact is that the leaflet contains a list of names of Ahmadi industrialists, doctors and businesses. The first name is that of a cloth house, three owners of which were gunned down in a blatant attack last year.

Umoor-e-Aama of Jama’at Ahmadiyya Faisalabad reacted sharply to this and said that the propaganda campaign being carried out unhindered by some fanatic religious groups under patronage of law-enforcing agencies and the provincial government. 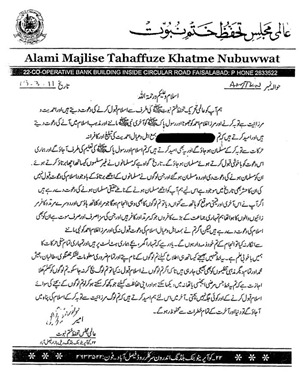 The community also blamed the Punjab government for ignoring myriad protests lodged by the province’s Ahmadiyya community. It says that such religious fanatics are being encouraged by inaction on the part of government agencies.

The jama’at’s secretary Mahmood Ahmad, in an email addressed to the province’s home secretary and police chief, and Faisalabad’s regional police officer, has written: “We have time and again approached police authorities against hate literature but nothing has been done so far. This collapse of law and order can be traced to the cowardice, inefficiency and incompetence of law enforcement agencies.”

Ahmad points out that it is easy to trace the pamphlet’s source as even its publisher’s mobile number is brazenly given in print. This also shows the publisher’s disdain towards Pakistan’s laws and agencies enforcing them.

“Our mouths have been taped shut. Our hands have been tied. I am writing this in the hope that somewhere somehow this letter finds its way to a patriotic police or other official who takes a fearless stand for the sake of Pakistan,” the email says.

City police chief Rai Tahir Hussain also said he had no information about the pamphlets.

Faisalabad DSP Mian Khalid also pleaded ignorance on the matter, and said that the Kotwali SHO would have the information.

When contacted, SHO Malik Muhammad Shahid said that since no complaint has been made, there was no question of taking action.