HRH, the Earl of Wessex, Prince Edward today paid a visit to the Fazl Mosque in South West London. The Fazl Mosque, commonly known as the ‘London Mosque’ is owned by the Ahmadiyya Muslim Jama’at and is London’s oldest mosque.

Prince Edward arrived at 11.20am and was greeted by a delegation of the Ahmadiyya Muslim Jama’at, led by its Khalifa, Hadhrat Mirza Masroor Ahmad, who is the worldwide spiritual leader of the community.

The Earl of Wessex was attending in his capacity as a Patron of ‘The London Gardens Society’ and thus took the opportunity to inspect the gardens of the Fazl Mosque, which has won numerous awards over the past few years. The Earl was also able to view a small exhibition about the history of the mosque.

The Earl was accompanied throughout the visit by Hadhrat Mirza Masroor Ahmad, who himself has a keen interest and expertise in horticulture. The Earl also viewed the actual mosque and was keen to learn of its history. He was also able to view a private garden within the complex where he was pleased to see a large cherry tree cultivated under the supervision of Hadhrat Mirza Masroor Ahmad over the past few years. 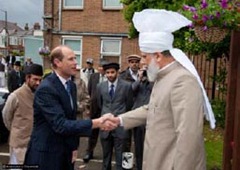 Hadhrat Mirza Masroor Ahmad also informed the Earl about how the Ahmadiyya Khilafat has been based in the UK since 1984 due to the persecution faced by the Jama’at in Pakistan.

At the conclusion the President of the Ahmadiyya Muslim Jama’at UK, Rafiq Hayat, invited the Earl of Wessex to visit the Jamaat’s Baitul Futuh mosque in Morden at a later date.

A number of other local dignitaries also attended including the Mayor of Wandsworth, Councillor Jane Cooper.