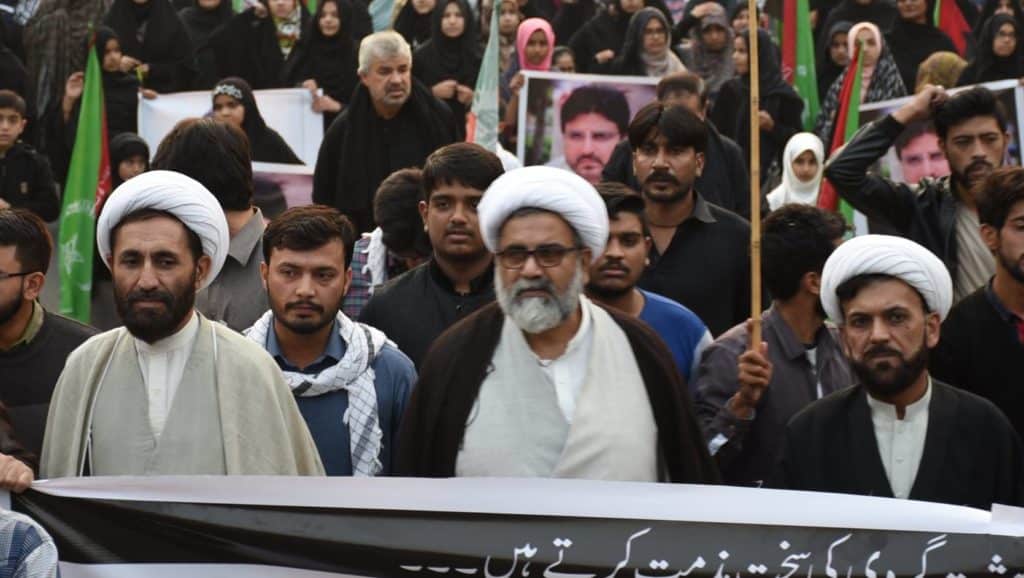 A Pakistani Shia leader has warned that the public and the government should be made aware of the “dangers” posed by Baha’is and Ahmadis. Shia cleric Allama Iqbal Bahishti urged the Government to be watchful of the ‘heretic’ Baha’is & Ahmadis.

Allam Iqbal Bahishti who is the provincial secretary-general of Pakistan’s largest Shiite political organization the Majlis Wahdat-e-Muslimeen (MWM) made the comments while speaking to members of the press on November 11.

The Islamic world was split into two groups, Sunnis, and Shiites but the colonial powers very cleverly planned the foundation of four fraudulent religions, for two of which they chose the Arab world and for the other two they chose the non-Arab [Persian] world. Then from these regions, prominent personalities were selected to lead those faiths.

Bahishti claimed that the Wahabi, Bah’ai and Ahmadiyya faith were the product of colonial conspiracy against the Islamic world. He claimed:

Thes superpowers conspired against Islam in the 18th century and laid the foundation of fraudulent and heretic faiths.From these four faiths, Wahabism quickly gained popularity and so did Qadianiat [Ahmadiyya]. However, the heretic faiths failed to gain any ground in the Shia world and the reason for this was the countermeasures by the Shia community.

He described Bahai and other faiths as heretics and said the colonial powers are scared of Islam and hence use these individuals to gain their objectives and the biggest obstacle that they face is Islam.

In Pakistan, there is a great deal of awareness of against Qadiyaniyat [Ahmadis]. After defeat in Iran, the Bahais directed their focus towards South Asia and Europe. The ideological center of the Bahais is in the city of Haifa which is located in the Zionist state of Israel. Bahis are more dangerous than the last three heretic faiths.

The Bahais have dozens of small centers from the Northern areas to Karachi in the south. It is very important that the public, as well as authorities including the interior ministry and the religious department, should be made aware of the danger of these beliefs.

The MWM follows the Ayatollah, the supreme leader of Shias based in Iran.  Shia regime of Iran has long persecuted its Baha’i citizens, Since the 1979 revolution the Baha’is have faced systematic persecution and suffered widespread discrimination solely for believing in a faith that is not officially recognized by the Iranian Constitution.

Similarly, the Ahmadiyya Muslims have also faced severe persecution at the hands of Pakistani authorities. In 1974 Pakistan amended its constitution to declare the Ahmadi ‘non-Muslim’. Majority of Sunnis and Shiites consider the Ahmadis apostates due to which they are a target of sectarian attacks. Many Ahmadis continue to serve prison terms of the blasphemy including the crime of keeping copies of the Quran.