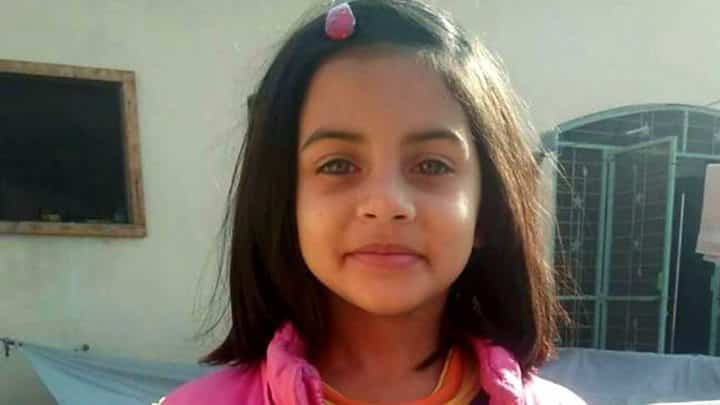 The father of an 8-year-old Pakistani girl whose rape and killing shocked the nation has told the Government that a “non-Muslim” Police officer should not be allowed to investigate his daughter’s death.

The girl, Zainab Ansari, disappeared last week while going to a nearby home for Quranic studies and her body was found in a Kasur waste-yard on Tuesday. The father, Anees Ansari, was on a pilgrimage in Saudi Arabia with his wife at the time of his daughter’s disappearance.

Her murder sparked clashes Wednesday between angry Kasur residents and police after protesters enraged over her death attacked a police station in the city. Two people were killed and three others were wounded in the clashes.

The government appointed Additional IG Abu Bakr Khuda Baksh to investigate the case, however, Zainab’s father objected the officer’s appointment and claimed that Baksh was a ‘Qadiani’ and hence should not be allowed to investigate his daughter’s murder. He demanded that the Joint Investigation Team’s head be replaced by a Muslim. Upon Ansari’s request, Baksh was replaced by Multan Regional Police Officer DIG Muhammad Idrees.

Pakistani Police officer stopped from investigating 8-year-old girl’s rape & murder because he is an #Ahmadiyya and 'not Muslim' #JusticeForZainab https://t.co/ds7TcPSZis pic.twitter.com/rdTSyyBCRN

The Ahmadis are considered heretics by the majority of Pakistani Muslims and are severely persecuted in the Islamic republic. Pakistani twitter which was actively demanding justice for Zainab under the hashtag #JusticeforZainab was shocked at the comments made by her father and called him out on what they claimed was “bigotry”.

Hatred and bigotry knows no bounds. The men who raped and killed his daughter may be "Muslims" (most likely, will be "Muslims"). But an Ahmadi heading a commission to dispense justice is the problem for him? This is so nauseating. https://t.co/TFdEDzkv2k

Zainab’s father demands the Ahmedi head of team investigating the case be replaced with a “Muslim” as he cant trust an Ahmedi.

My sympathies but bigotry knows no bounds, sir. Your daughter is raped and murdered, probably by a Muslim. Faith doesn’t guarantee morals or competency.

I demand equal rights for all Police officers when they have equal responsibilities to deliver
No matter if one is Qadiani, Sunni, Shia, Christian or Hindu
What makes one bad is their inefficiency & corruption
what makes one a Hero is their honesty & bravery#AbubakarKhudaBakhsh

Most competent police officer AIG “Abu Bakar Khuda Buksh” removed by CM Punjab Shehbaz, because Zainab’s father objected him he is Ahmedi-Qadiani shouldn’t part of JIT, no proper formation of investigation team, no equal rights to all citizens of Pakistan ???????? Sad!

What to satisfy him. They dumped their daughter with relatives. They did not return for five long days until her body was found. They are obstructing state’s work by converting it to Qadiani-Non Qadiani matter which would increase further witch hunt to the community#ZainabMurder

“Qadiani” is a pejorative term used by Muslim right-wing clergy when referring to Ahmadi Muslims. The comments by the victim’s father also got a reaction from the members of the Ahmadi community who responded to his hatred on social media.

As an Ahmadi Muslim seeing this really gets to me- my grandfather was a police officer in Pakistan and an Ahmadi Muslim and he was highly respected by everyone in the town . It’s sad to see now how even in a time of pure grief and anguish that he’d be a bigot.

Ahmadi activist Kashif Chaudhry’s tweet went viral on the Pakistani Twittersphere in which he assured Zainab’s father of his support despite the hate shown by him for his fath. 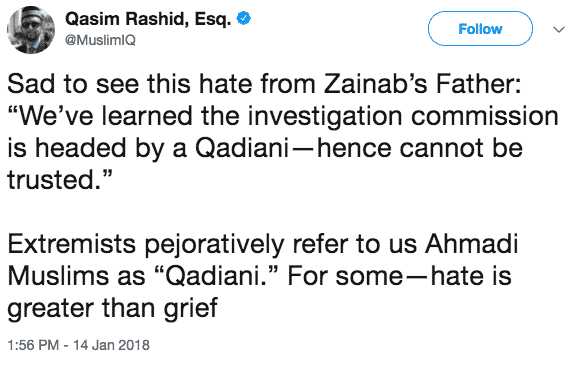