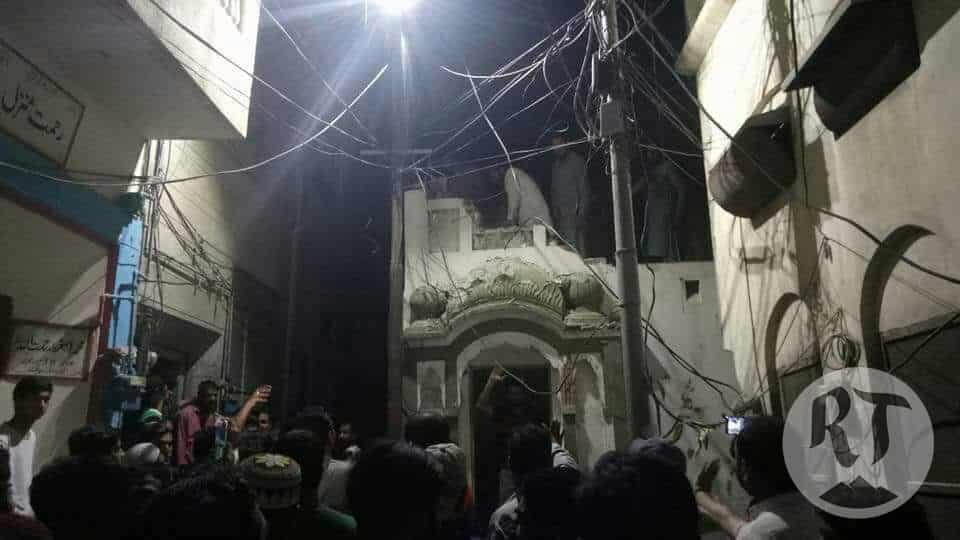 A mob of Pakistani Muslims destroyed a historic Mosque in the early hours of Thursday. The Mosque which is located in the city of Sialkot was once attended by Pakistani poet and thinker Sir Allama Muhammad Iqbal.

The attack started late Wednesday night after a mob of over 600 men gathered in the Kashmiri Mohalla and started chanting slogans against the minority Ahmadiyya Muslim Community, to which the Mosque belongs.

The mob was led by Hafiz Hamid Raza, a member of the Pakistan Tehri-e-Insaf (PTI) political party who thanked the local planning authority and the local Police commissioner for their “support” in demolishing the Ahmadi Mosque. Raza joined PTI back in 2015 and has been seen with PTI leader Imran Khan.

A spokesperson for the Ahmadiyya community in Pakistan, Saleemuddin said “There were no casualties because the buildings were empty at the time of the attack due to ongoing renovation work”

He also noted the importance of the property, saying Mirza Ghulam Ahmad, who founded the Ahmadiyya community in British-ruled India in 1889, had briefly lived and prayed there.

On May 14th Dawn reported that the local administration had sealed the mosque following mounting pressure from local religious and political circles.

The attack came hours before the UK Parliament was to start a debate on the persecution of the Ahmadi community. Pakistan declared Ahmadis non-Muslims in 1974. Ahmadis make up a tiny minority of Muslim-majority Pakistan and are often targeted by Sunni militants who consider them heretics.

The attack was condemned by Mark Field, UK Minister of State for Asia and Lord Tariq, UK Minister for Human Rights.

Terrible to hear reports of the attack on an Ahmadi mosque in Sialkot, Pakistan, last night. Will be addressing the issue when I speak in @HouseofCommons this afternoon on persecution of Ahmadiyya community.

UK @foreignoffice @ukinpakistan has repeatedly called for Pakistan @CMShehbaz to protect all communities & faiths -yet last night we again see a frenzied mob destroy a beautiful&historic mosque in #Sialkot -the tragedy of the continued persecution of #Ahmadi #Muslims @alislam pic.twitter.com/IzmzGrNvXH