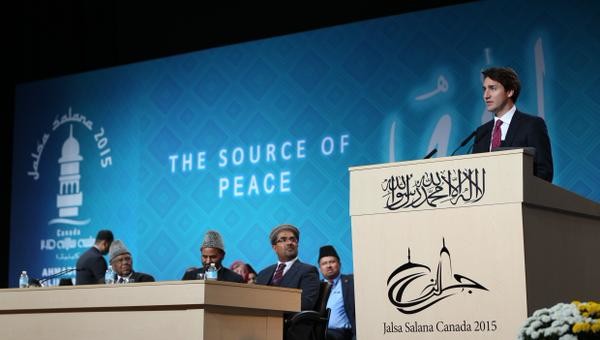 Trudeau said it was great to be back at the Jalsa Salana convention and congratulated Lal Khan Malik, the National President of Ahmadiyya Muslim Community in Canada for putting the event together.

He went on to say:

“I am delighted to be back here among the Ahmadiyya community, each time i feel the warmth of your friendship, your kindness and compassion and with your help i will be back again next year as your Prime Minister … Inshallah”

When he was in Toronto the 4th Khalifa late Hadhrat Mirza Tahir Ahmad said My Prayer is that Canada should become the World and the World should become Canada, i think we can all agree on that.

Trudeau told the audience at the convention that “Liberals believe in a Canada that is united — strong not in spite of its differences, but precisely because of them.”

He said that under Stephen Harper, Canadians are being encouraged to be fearful of one another, and there has been a decline in family reunification, refugees and citizenship applicants.