On 6 October 2015, World Head of the Ahmadiyya Muslim Community, Khalifa of Islam, His Holiness, Hazrat Mirza Masroor Ahmad, delivered an historic address at a special session of the Standing Committee for Foreign Affairs at the Netherlands National Parliament in the country’s capital city of Den Haag (The Hague) in front of an audience of more than 100 dignitaries and guests.

Upon arrival at the Parliament, Hazrat Mirza Masroor Ahmad was greeted by Harry van Bommel (Member of the House of Representatives and Deputy Chairman of the Standing Committee for Foreign Affairs), who escorted His Holiness to the Committee Room.

Khalifa of Islam His Holiness Mirza Masroor Ahmad delivered a keynote address during which he deemed the threat to the world’s peace and security to be the critical issue of this era.

His Holiness called on world powers to support less economically developed nations and to refrain from exploitation.

Speaking about the increasing lack of peace in the world, Hazrat Mirza Masroor Ahmad said:

“In today’s world we see that certain issues are constantly being highlighted and labelled as the most significant problems of our time. If we analyse the situation objectively, we realise that world peace and security is indeed the most critical issue of our time. Unquestionably, with each day that passes the world is becoming increasingly unstable and dangerous and there are a number of potential causes of this.”

His Holiness said there were various factors affecting the world’s peace and security, including worldwide economic instability; a lack of justice and trust between governments and members of the public; and the increasing discrepancy between developed and developing nations.

The religious leader said that neither Islam, nor any other religion, could be blamed for the violent acts of extremists.

“an injustice of the very highest order”. 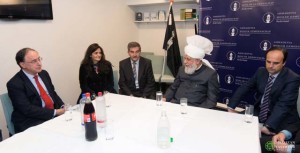 “Quite simply, in Europe and in the West, the governments are secular and so a Muslim can never have the right to violate the laws of the land, to violently oppose the government or to instigate any form of rebellion or insurgency.”

Following the conclusion of his address, members of the Standing Committee were given the opportunity to ask His Holiness his views on a range of issues, including religious freedom, freedom of speech, the refugee crisis and the persecution of the Ahmadiyya Muslim Community.

Later, His Holiness personally met various dignitaries and guests and was also given a tour of certain historic rooms within the Parliament.