Israelis and Palestinians come together to fight wildfires 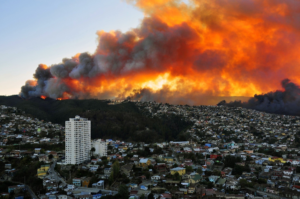 The Wildfires which lasted four days forced 60,000 people to evacuate and affected Israel’s third-largest city of Haifa. The Palestinian crews joined the firefighting efforts on near Haifa and on the outskirts of Jerusalem. Additional firefighters from Ramallah arrived on Saturday morning to help with fires at the West Bank settlement of Halamish.

“This is a humanitarian situation, It’s our duty to help,” said Muhammad Amayra, one of the veteran firefighters on the PA firefighting team.

“The Israeli firefighters welcomed us very nicely, They helped us with everything” he added.

Israeli Prime Minister Benjamin Netanyahu called Palestinian President Mahmoud Abbas and thanked him for his support in overcoming the fires.

Israeli Member of Parliament Anat Berko alleged that Haifa’s Arab neighborhoods had been deliberately spared from the fire. In an interview with Channel 10 news, Berko said “how is it possible that the fire did not reach the neighborhood of Kababir, Haifa.”

The neighborhood of Kbabir, is located just few minutes’ drive from the fires and home to adherents of the Ahmadiyya sect of Islam.

Head of the Ahmadiyya Muslim sect in Israel, Muhammad Sharif Odeh, expresses his dismay at the MP’s comments. Odeh said he is astounded by Berko’s remarks, as she is personally familiar with many members of the sect and is aware of the community’s attitude towards the Israeli-Palestinian conflict.

Odeh further said that during the fire, members of the Ahmadiyya Muslim Community opened up the local auditorium center to host 150 soldiers from Israel’s Home Front Command who had been deployed to Haifa.

The Ahmadiyya is a peaceful Islamic sect established in India in the late 19th century. Adherents of the faith reject all forms of violence and perceive jihad as an internal, psychological struggle.

“I don’t want to think it was someone from Haifa, Jews and Arab live in peace here. The city is theirs and ours. You don’t want to believe that this beautiful fabric could turn into hatred and revenge.”