Governor Basuki “Ahok” Tjahaja Purnama has said that he has ordered the South Jakarta Mayor and the Spatial Planning Agency to reopen an Ahmadiyya mosque in Tebet, and that he would promise to help the Ahmadiyya secure permits to keep their mosque open there.

“We respect all kinds of beliefs. So, if they pray and do not bother other people, we have to let them be,” he said on Friday, adding that moreover, the Ahmadis had been praying there for years.

Ahok said that if the Ahmadis were new people who had suddenly arrived and wanted to pray there, it would be reasonable for the surrounding residents to raise concerns.

But given the long presence of Ahmadis in the area, Ahok questioned the validity and reasonableness of the recent objections. “I have heard that they have been praying there since the 1970s, so why now?” he asked.

Ahok said that he would alter the designation of the contested house from a residential entity to a place of worship if the Ahmadis asked him to.

Dozens of Ahmadis who attend the An-Nur Mosque in Tebet have been barred from entering their mosque by locals and radical groups. The Ahmadis are presently worried about finding a place to pray for Idul Fitri. The South Jakarta administration has sealed the building since Wednesday, arguing that the building should have been listed as a residential facility and not a place of worship.

Aryudi Prastowo, one of the leaders of the Ahmadis in the area, said on Friday that the community had not yet planned to hold early morning Idul Fitri Eid prayers in any other place other than the An-Nur Mosque. They hoped to unseal the mosque through legal processes.

Satria Wirataru, a representative from the Commission for Missing Persons and Victims of Violence (Kontras), said that the sealing of the mosque was conducted three weeks after an audience of Ahmadiyya representatives met with Syamsuddin Noor, South Jakarta deputy mayor, and some other officials, such as the Bukit Duri subdistrict head and Tebet district head.

“The deputy mayor did not say anything at that time that indicated that he would reject the Ahmadis. He only asked them to complete the process of legalizing the mosque,” said Wira, as Wirataru is better known. He added that the license was very difficult to obtain due to the Joint Decree of 2008 issued by the Religious Affairs Ministry, the Home Ministry and the Attorney General, which requires a recommendation from the subdistrict administration and the Indonesian Ulema Council (MUI) in order for a license to be granted.

Ahok, however, said that he did not see how he could successfully mediate a solution. “There is no use in mediation if their doctrine [the doctrine of the MUI and the subdistrict head] is already intolerance,” he said. 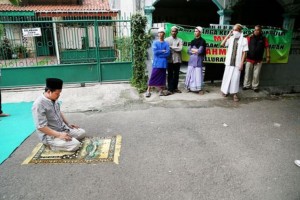 The Ahmadis expected the South Jakarta municipality to provide them with an alternative place of prayer. According to Aryudi, the government is obliged to ensure that all citizens — including Ahmadis —are able to perform their religious activities. To date, however, their expectations have not been met.

“I have asked the South Jakarta government to provide us with some space in which we can pray. Where and whether we will have our Eid prayers on Idul Fitri, therefore, depends on the government,” he said on Friday afternoon after a press conference at the Jakarta Legal Aid Institute (LBH Jakarta).

Earlier on Friday, a group of approximately 20 Ahmadis were blocked from performing their Friday prayers by roughly 50 locals who had barred the road with a long-bamboo stick and had affixed a banner to it that read, “People of Bukit Duri reject Ahmadiyya.”

Calling the Ahmadis “evil” and “intruders”, the crowd of men and boys did not allow the Ahmadis to enter Jl. Bukit Duri Tanjakan Batu, the street location of the An-Nur Mosque.

They also approached and insulted Ahmadis who had managed to sneak in to the mosque and perform their prayers by taking their pictures in a bold and intrusive manner.

“Moreover, we reject them because no one in this RW is an Ahmadi,” she said. She added that the An-Nur Mosque was accepted before because the community elders lacked information about “the deviant belief of the Ahmadiyya.”