Around 500 delegates from 26 countries attended a landmark conference, including faith leaders from various countries, politicians, government officials, members of the diplomatic corps, academics and representatives of various NGOs. The conference also received many messages of support from key figures including Her Majesty Queen Elizabeth II, His Holiness the Dalai Lama, the Archbishop of York, the Archbishop of Wales, the Vatican as well as Prime Minister David Cameron.

The ‘Conference of World Religions’ held at the Guildhall in London, was organised by the Ahmadiyya Muslim Community UK, as part of its centenary celebrations. The theme of the event was ‘God in the 21st Century’. The panel of speakers featuring various faith leaders considered what role religion could play in today’s world and whether religion continued to be a force for good.

The worldwide head of the Ahmadiyya Muslim Community, His Holiness Hazrat Mirza Masroor Ahmad (the Khalifa of Islam), delivered the keynote address. He highlighted that all the major religions of the world taught the worship of God and love and compassion for mankind. He said that if these original teachings were upheld today it would lead to a harmonious society, free from conflict and war. It is a matter of great concern that governments across the world are prioritising defence and military spending above and beyond social welfare and humanitarian projects.

His Holiness called on the leaders of all nations to seek social welfare and justice for all and bring the race to militarisation to an end.

Other key leaders also addressed the conference including:

Archbishop Kevin McDonald, representing the Catholic Church, spoke of the World Day of Prayer for Peace organised by the late Pope John Paul II in 1986 and said that “today’s conference is another moment of the coming together of the people of different religions in peace and justice.” The Archbishop also read a message of support from Cardinal Peter Turkson, the President of the Pontifical Council for Peace and Justice.

A message from His Holiness the Dalai Lama was read out by Geshe Tashi Tsering:

“Virtues of love and altruism are the basis of all religions and so a respect for all religions is essential. All religions are a means of inner-peace. I give my full heartfelt support to the Conference of World Religions.”

“Humankind in the world is not its masters but its custodians. Let us return to the simple notion of faith and the sanctity of God.”

“The evening was a great opportunity to demonstrate the selfless service given by people of all religions and to show that people who ‘do God’ do good”.

“The right of individual conscience is the basis of everything and so it is essential that people are free to practice their religions without coercion of any kind. I would also like to thank Your Holiness (Hazrat Mirza Masroor Ahmad) and the Ahmadiyya Muslim Community for their astonishing contribution to the United Kingdom.” 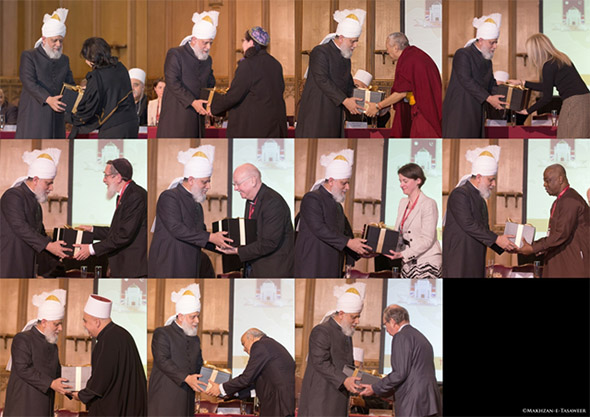