“Jews are backing the Qadianis (Ahmadis) , this (Ahmadiyya) is cancer that has to be destroyed”

” We will follow the Qadianis (Ahmadis) wherever they go”. 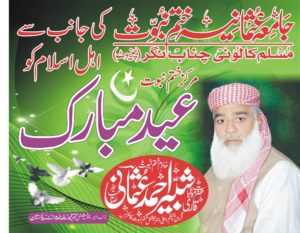 Speaking to a similar gathering in Charsadda in the northern province of KP, Molana ALlah Wasaya of Aalmi Majlis Tahafuz-e-Khatme Nabuwat demanded that September 7th be declared a National Holiday and products and businesses owned by Ahmadis should be boycotted.

AMTKN also demanded a full ban on the Ahmadiyya youth association and called on the Government to confiscate assets of Ahmadis.

Speaking to another conference 80 miles south of Charsadda, District Nazim of Hangu Mufti Ubaidullah called upon the Government to not give jobs to Ismailis and Ahmadis.

Mufti Muhammad Abdullah of the Jamaat-i-Islami said: “Ahmadis were stooges of the West and enemies of Pakistan.”

The infamous Lal Masjid of Islamabad displayed banners celebrating the 1974 decision to declare Ahmadis as non-Muslims.