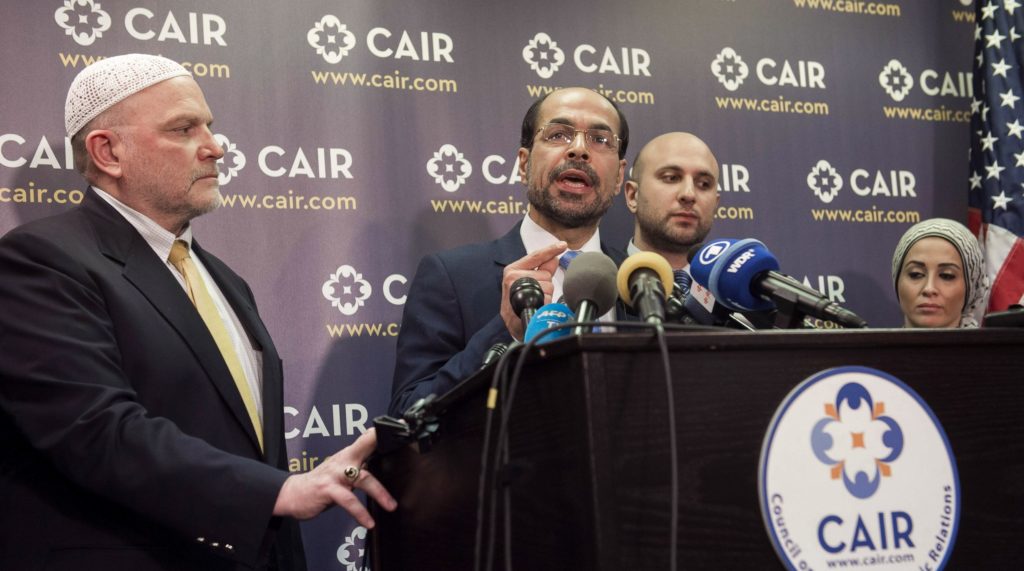 Part of how lawful Islamist groups are so insidious is that they are perfectly willing to pretend to respectability by mouthing the correct pieties of our tolerant society, but are quick to jettison their professed tolerance when it suits them – to the detriment of moderate Muslims everywhere. In the past few days, the Council on American-Islamic Relations (CAIR) gave us a clinic in how it is done.

CAIR’s frequent ally, American Muslims for Palestine (AMP), has a recurring problem with anti-Semitism. Its founder, Hatem Bazian, has a long history of crude bigotry, and other AMP leaders are little better. In February, AMP-New Jersey president Sayel Kayed (a former member of AMP’s national board) gave a speech in Middlesex which included several grossly anti-Semitic statements, including the false and ludicrous claim that Israeli prime minister Menachem Begin claimed Jewish ownership of Mecca, and that Israel aspires to invade and annex all territory between the Nile and the Euphrates rivers; he also agreed with an audience member who claimed that most European Jews are descended from the Turkic Khazar people (a popular claim in anti-Semitic circles which has virtually no scientific support), and therefore have no historical claim on the land of Israel.

Recently, Islamist Watch coordinator Samantha Mandeles reached out to the New Jersey chapter of CAIR to ask for its reaction to Kayed’s slurs. In response, CAIR-NJ director Jim Sues wrote, “CAIR has a long history of challenging anti-Semitism in all its forms. We believe that such statements are inappropriate.” Mandeles duly noted the exchange on the Islamist Watch blog, as well as an identical statement from CAIR-National director Ibrahim Hooper, and the Middle East Forum posted on Facebook that “CAIR Condemns [AMP]’s Blatant Anti-Semitism.”

At this point, the recriminations started flying. CAIR was pummeled on social media by angry Islamists, accused of “brown-nosing” the hated “Islamophobes.” On June 5th, CAIR-NJ posted in response:

“CAIR did not condemn American Muslims for Palestine (AMP) or its leaders as anti-Semitic. Our reaction was in reference to one statement by an audience member at a public event, not to AMP itself. Unfortunately, anti-Muslim and pro-Israeli Apartheid groups seek to promote their extremist views using distortions and misinformation. CAIR does not and has never considered AMP or its leaders anti-Semitic.”

This clarification is informative. We are indeed guilty of giving CAIR too much credit, and I suppose they are right to blame us for taking its claim of having “a long history of challenging anti-Semitism in all its forms” at face value. After all, we should have known that it’s only anti-Semitism when an audience member says something bad, and not when a featured presenter agrees with it. Just to be sure, we reached out to CAIR to give them a chance to reconcile these contradictions, and have received no response. CAIR also deleted comments that MEF left on its Facebook post, explaining the situation in detail. How silly of us to assume that when CAIR says it opposes anti-Semitism “in all its forms,” CAIR actually means it!

In the past, we have also given Mr. Sues credit for the same (apparently boilerplate) denunciation of inflammatory religious sermons; however, this latest episode gives us reason to revise our view. It seems that opposing anti-Semitism “in all its forms” actually means “as narrowly defined as we can get away with, and only when it is convenient to do so.” And truly acknowledging the hatred at the root of AMP would indeed be inconvenient for CAIR; indeed, CAIR-NJ and AMP are partnering again to pressure Congress to intervene in the latest Gaza fighting.

CAIR’s claimed opposition to anti-Semitism is, as it always was, a tool to be deployed when politically useful and to be discarded when it would interfere with the Islamist project. Progressive groups, such as LGBT, feminist or Ahmadiyyah organizations, that might mistake Islamists for potential allies should pay careful attention. And if they are wise, they will ask themselves: how long will it be before their own interests are discarded in turn?

Oren Litwin
Oren Litwin is a writer at Islamist Watch, a project of the Middle East Forum @     Facebook