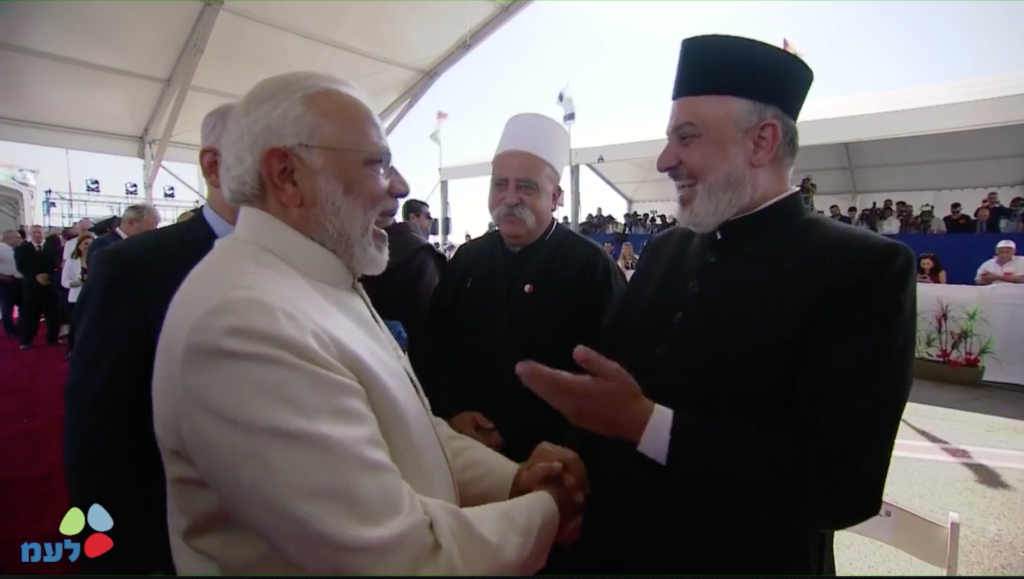 As Indian Prime Minister Narendra Modi arrived in Israel on Tuesday, He was greeted by the Israeli Prime Minister Benjamin Netanyahu along with representatives of various communities including the Ahmadiyya.

The welcoming party at Tel Aviv airport was made up of various leaders from all over Israel, which included representatives of the Druze, Bahais and the Ahmadiyya.

The President of the Israeli chapter of the Ahmadiyya Muslim Community, Muhammad Sharif Odeh greeted the Indian PM alongside Israeli PM Netanyahu and introduced himself much to the delight of PM Modi. The brief handshake turned into a conversation as Mohammed Sharif Odeh thanked PM Modi for his support of the Ahmadi community back in India and said:

We want to thank you for helping our community in India. Thank you very much

Indian PM smiled back, thanked him for his kind words and affirmed that his Government maintains close relations with the Ahmadiyya community back in India.

We are very close to the Ahmadiyya community

A final round of Thank you’s were exchanged between the two and the brief the conversation ended with a laugh with Odeh welcoming the Indian PM to the Holy Land.

Ahmadis who consider themselves Muslims are severely persecuted and discriminated in Muslim countries, In Pakistan, they have been declared ‘non-Muslim’ by law. Meanwhile, Ahmadis enjoy religious freedom in countries like India and Israel.