Ahmadi Muslims gather in Hampshire for their annual convention

It promises to be a beautiful sunny weekend. But why have tens of thousands of Ahmadi Muslims come together in the picturesque Hampshire countryside?

Rows of tents are pitched in a spacious field, with men and women of all ages enjoying the late summer sunshine. Regular loudspeaker announcements inform the crowd of who will be next on stage.

This is not a music festival but a religious convention. The three-day Jalsa Salana event in Alton, which is hosted by the Ahmadiyya Muslim Association, is a celebration of the community’s centenary in the UK.

Organisers estimate more than 30,000 people will take part, with guests coming from as far as Fiji and Ghana.

“Gatherings like this are great as it shows that you can be proud to be both British and Muslim – you don’t need to choose between the two,” says Adeel Shah, 18, a student at one of the Ahmadiyya Muslim community’s Islamic universities.

Having grown up in multicultural south London, he was keen to invite his non-Muslim friends to the event.

“As Muslims it’s our duty to give back to the country we live in and integrate with our neighbours. It’s important that we build friendships and relationships regardless of religious differences,” he said.

Mr Shah is one of hundreds of volunteers helping out at the convention, performing tasks ranging from putting up marquees to cooking meals for guests three times a day. A bakery has even been installed on site, producing 10,000 pieces of chapati bread per hour.

The Ahmadi Muslim community built London’s first mosque in 1926, which acted as a bomb shelter during World War II.

They have also often engaged in charity work designed to display loyalty to their host country, including selling poppies on behalf of the Royal British Legion.

The makeshift village is set up by volunteers each year and includes stalls, exhibitions and even a satellite television studio, which broadcasts the event live across the world. Members raised a union jack at the opening ceremony of the gathering and will form a human chain to “re-affirm their rejection of violence and extremism”.

The movement’s leader, Hadhrat Mirza Masroor Ahmad, addressed the convention, which also had guest speakers from other faiths. 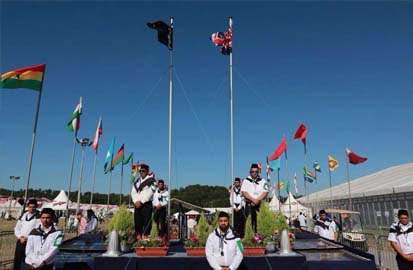 Those behind the event say they want to show that Islam is a peaceful religion, particularly in light of an increase in the number of Islamaphobic attacks since the death of soldier Lee Rigby in Woolwich.

“We strive to serve God and serve mankind. This is the essence of Islam that we adhere to, which is based on a jihad of love and not a jihad of the sword,” he said.

The Ahmadiyya community is persecuted in places including Pakistan and its members have also faced hostility here. In 1974, the Pakistani government declared the sect non-Muslim because of theological differences with mainstream Islam, Mr Hayat added.

“We are proud to live in Britain and contribute to a country that offers true freedom to people of all faiths,” he said.