US lawmakers show support for Ahmadiyya

WASHINGTON — US lawmakers on Wednesday offered support for the global leader of the Ahmadiyya Muslim community, which has faced discrimination and violence in Pakistan and Indonesia.

Lawmakers welcomed Hadhrat Mirza Masroor Ahmad, the leader or khalifa of the minority Muslim group, in the US Capitol complex and praised the sect for supporting inter-religious peace and efforts such as blood donation drives.

Senator Robert Casey, a Democrat from Pennsylvania, praised the religious leader for the “demonstrated commitment that you have shown to tolerance and to justice and to peace.”

Representative Keith Ellison, who is Muslim, noted the Ahmadiyya’s problems in Pakistan and said: “In this world we live in, the fact is that there are precious few countries where all the people can practice their faith as they are inspired to do.”

Founded in 1889 in India, the Ahmadiyya differ with most Muslims by considering the movement’s founder to be a messiah. Pakistan in 1974 adopted a law to brand the Ahmadis as non-Muslims.

Activists say that the law has contributed to persecution of the community. More than 80 people died in May 2010 when gunmen stormed two Ahmadiyya mosques in Lahore and then attacked victims being treated at the hospital.

Indonesia in June 2008 restricted the Ahmadis to practicing at home. Since then, at least 50 Ahmadiyya mosques have been vandalized and 36 mosques or meeting places shut down, according to the US Commission on International Religious Freedom.

Katrina Lantos Swett, the chair of the commission and daughter of the late lawmaker and rights activist Tom Lantos, called for the United States to press Pakistan and Indonesia to amend their laws. 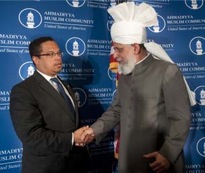 “The United States should specifically confront governments which target the Ahmadiyya,” she said.

The Ahmadiyya leader, who is visiting the United States from his London base, delivered an address in which he called for powerful and weak nations to treat one another with respect.

“If we desire peace to be established in the world, then we must leave aside our personal and national interests for the greater good and instead we must establish mutual relations that are based entirely on justice,” he said.