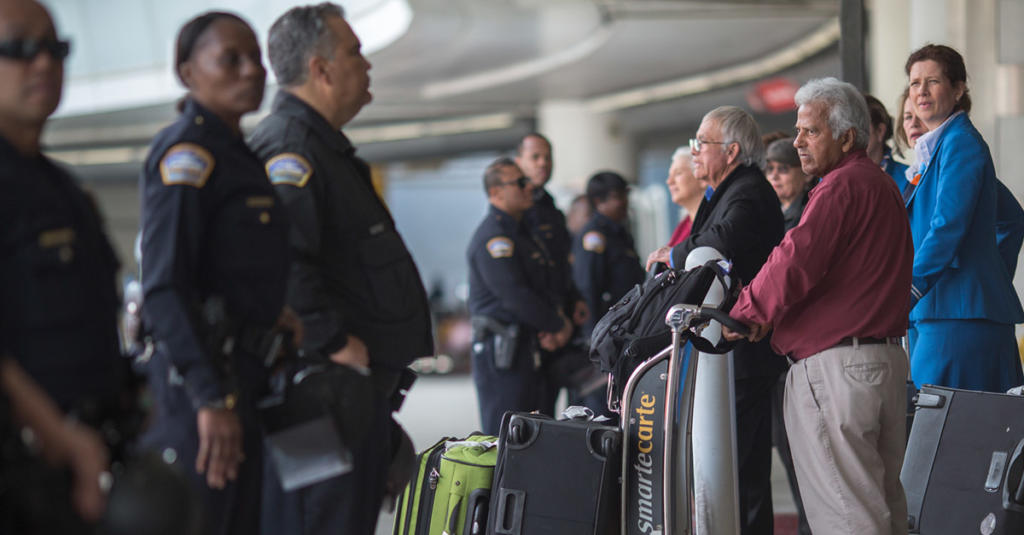 When one wakes for work in the morning, and leaves for the day, they secure their home by locking the door to ensure their loved ones inside are in safety.  They do this not because they despise those outside or don’t care for them, but because they love those inside.  This analogy can be used in representing the recent Executive Order signed by President Trump.  This order has been scrutinized across the world.

Is it a Muslim ban?

When reading the text of the Executive Order signed by President Trump, aside from Syria, the other 6 countries are not listed.  However, where does Iraq, Iran, Libya, Somalia, Sudan, and Yemen come from as having a temporary restriction?  On December 18, 2015, TWO YEARS before Trump took the Presidency, Obama signed the Terrorist Travel Protection Act which designated these countries.

According to the Governmental Accountability Office (GAO) report, the Department of Homeland Security (DHS) and US Custom’s and Border Protection (CBP) indicated:

“CBP data shows that it identified and interdicted over 22,000 high-risk air travelers in fiscal year 2015 through its predeparture programs….In fiscal year 2015, CBP data indicate that more than 8,100 known or suspected terrorists, or individuals with connections to known or suspected terrorists, attempted to apply for travel to the United States or board U.S.-bound flights.”

Security is much the concern of every country.  It is the reason too, that Pakistan had chosen to deport Afghanistan refugees within their country as well.  Every country has identified threats that they feel are relevant to warrant action to protect their citizens.

“All Americans, not only in the states most heavily affected but in every place in this country, are rightly disturbed by the large numbers of illegal aliens entering our country. The jobs they hold might otherwise be held by citizens or legal immigrants. The public service they use impose burdens on our taxpayers. That’s why our administration has moved aggressively to secure our borders more by hiring a record number of new border guards, by deporting twice as many criminal aliens as ever before, by cracking down on illegal hiring, by barring welfare benefits to illegal aliens. In the budget I will present to you, we will try to do more to speed the deportation of illegal aliens who are arrested for crimes, to better identify illegal aliens in the workplace as recommended by the commission headed by former Congresswoman Barbara Jordan. We are a nation of immigrants. But we are also a nation of laws. It is wrong and ultimately self-defeating for a nation of immigrants to permit the kind of abuse of our immigration laws we have seen in recent years, and we must do more to stop it.”

Discrimination is based upon treating people unfavorable upon race, creed, sex, religion, and origin.  Those objecting to the Executive Order are often displaying hypocrisy as their voices are silent among many countries that discriminate against those of a particular origin.

Had individuals been concerned of discrimination, their voices would not be silent when other countries discriminate against an origin.  There are currently 16 countries that do not accept the Israeli passport.  Among those are Algeria, Bangladesh, Brunei, Iran, Iraq, Kuwait, Lebanon, Libya, Malaysia, Oman, Pakistan, Saudi Arabia, Sudan, Syria, United Arab Emirates, and Yemen.   Additionally, Iran, Kuwait, Lebanon, Libya, Saudi Arabia, Sudan, Syria and Yemen do not permit entry to individuals if there exists evidence of travel to Israel, or whose passports have either a used or an unused Israeli visa.

Had individuals been concerned for the welfare of others, there would be further outrage when Saudi Arabia, UAE, Qatar, Kuwait, Bahrain have resettled ‘zero’ refugees as Amnesty International described their inaction in the crisis as ‘shameful’.

Had individuals been concerned for the welfare of others, there would have been outrage when Kuwait banned five nationalities from Syria, Iraq, Iran, Pakistan, and Afghanistan.

Had individuals been concerned for the welfare of others, the neighboring nations to Israel would gladly open their door to Palestinians giving them full rights, yet instead, continue to exclude them from having certain rights or careers within Jordan and Egypt.

Had individuals been concerned about discrimination, when Hungary had wanted to refuse refugees and the prime minister wrote, “Is it not worrying in itself that European Christianity is now barely able to keep Europe Christian?”

According to Pew Research Spring 2016, polls indicated that Europeans were concerned that refugees would increase domestic terrorism.

Yet, now, we see a sudden “humanitarian” outcry by these same nations as an example, to criticize the United States for temporary strengthening their borders and screening processes.

America is a “melting pot” of many differing individuals from all nationalities and religions. In no way, is the recent Executive Order defying what America stands for.  America stands for freedom and safety INCLUDING those that have sought asylum away from persecution in another country.  America owes them safety.

Rather than using refugees as pawns for political purposes and self-righteousness, the recent President Elect suggested creating safe zones in the region.  Some other countries have agreed to this plan as it is in the best interest of those suffering.  Entering a foreign land, where language and culture are foreign, has detrimental effects.  Statistics indicate it takes 7 years’ minimum to acclimate and assimilate to a new country and be able to successfully build a life in which individuals can work and earn a living which leads to quality of life.  Therefore, one can’t claim that President Trump doesn’t care for the welfare of others.  He isn’t closing borders, but strengthening them to ensure the safety and wellbeing of others all while considering those that suffer elsewhere.  The doors of the homes still contain a lock as they have before, but offers the warmth and hospitality for many that are seeking safety among a sea of an eclectic person of democratic values.

The US is not the only country that welcomed the Trumps immigration order, but the Kingdom of Saudi Arabia, UAE and Israel also praised this brave step of security.

Saudi’s Energy Minister Sheikh Khalid Al Falih welcomed Trump’s ban on 7 Muslim countries and said that the US a right to strengthen her security and every country has right to defend itself.

Sheikh Abdullah bin Zayed Al Nahyan, the Gulf federation’s foreign minister of UAE said: “the US was within its rights to take what he said was a “sovereign decision” concerning immigration the first such remarks in support of Trump’s move from the Gulf Arab region.”

these countries are still fighting with terrorists. Half of the land of these countries is occupied and controlled by the terrorist regimes and this is why The US is unsure of the genuine immigrants as the Europe is yet fighting with the heat of terrorism from these countries. I hope, the world would understand the current unsecure situation of the US and would cooperate with the new US government to fight and secure their borders.