Thousands of Muslims to pledge allegiance to Islamic Caliphate

Thousands of British Muslims from cities, towns and villages across the UK will next week travel to the Hampshire countryside where they will join Muslims from across the world in pledging allegiance to Caliphate and in seeking spiritual guidance.

More than 30,000 members of the Ahmadiyya Muslim Community (AMC) will next weekend offer their pledges at a three-day international event, known as the ‘Jalsa Salana’, in Alton, Hampshire. The Jalsa Salana is the largest and longest standing Muslim convention in the UK, with 2014 marking the 48th year that the event has taken place in the UK.

Those attending the event will offer their pledge of allegiance to His Holiness Mirza Masroor Ahmad, the Worldwide Head and Caliph of the AMC. They will also listen to a series of speeches delivered by His Holiness on a variety of subjects promoting spirituality, peace and compassion.

The AMC is a peaceful Islamic movement, established in the UK for more than 100 years. Its founder, Hazrat Mirza Ghulam Ahmad, claimed to be the Mahdi and Messiah prophecised in the Christian, Jewish and Islamic scriptures. He stood against all forms of cruelty, reaffirming that true Islam is a religion of peace.

Delegates from 89 countries across the world will attend the Jalsa Salana. Thousands of British Muslims will also be travelling to Hampshire to take the pledge of allegiance from the Khalifa of Islam. The Pledge will also be taken by tens of millions of others via satellite TV on Sunday. Proceedings are transmitted to more than 80 million people worldwide and simultaneously translated into more than a dozen languages

The Jalsa Salana is held on a 200 acre Hampshire farm, which is turned into a global village in the two weeks prior to the event and taken down within a week. The facilities include accommodation, kitchen, food, bazar, library, book stalls, TV and radio stations. 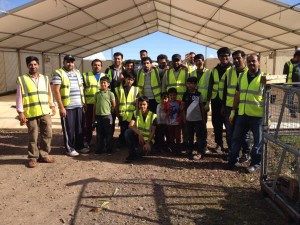 All the food for the attendees is prepared on-site by volunteers. This includes the running of a bread factory that produces 300,000 flat breads at a rate of 10,000 an hour.